A year ago we got a phone call informing us that we had a 4 month old daughter waiting for us in Ethiopia. This was the first picture we saw: 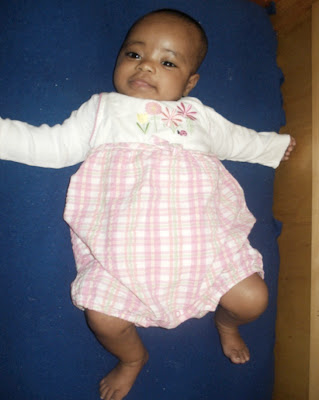 It has been a year, and I have been waiting weeks to write the "It's been a year since our referral" post. However when Friday rolled around, I just couldn't find the words. How do I convey how happy Alemitu has made our family? Tonight, Alemitu showed me the words.

We had friends over for dinner to discuss a new business venture. As we were talking details, my daughter walks around the corner in her Halloween costume. I was in business mode, and then Alemi melted my heart and lit up my face. Her bright eyes and big smiles lit up the entire room - thus lighting up my life. I realized right then that it isn't the vast array of emotions we have felt in the past year that I need to write about. It is simply describing the brightness in our lives because of Allie. I get to see that brightness in all of the little things, each and every day.

This morning Allie sat on the blanket watching her brothers play football. Alemitu was surrounded by her cousin who smiles every time she sees Allie; her 3 year old friend Faith who has renamed all of her own baby dolls "Allie"; and her 6 year old friend Makya who just admires Alemi at every game, practice, and social outing. My daughter lights up the lives of these little girls several times a week -- thus lighting up my life.

On Thursday my friend Hollie came to visit from Tennessee. She could not wait to get her hands on Alemitu, and I couldn't wait for Hollie to see all of Allie's changes. I was overwhelmed with feelings of pride and a sense of comfort. Hollie and her husband Brian, are the only people in the world who know the real Alemitu from as far back as Adam and I do during our first meeting with Allie to our first time taking her from the transition home. They are the only ones who can truly see how much Allie has changed, and how much has stayed the same. Hollie knows Alemitu's grandfather and she can't wait to one day tell Alemitu about her grandfather's kind eyes. Hollie always calls 'Allie' - 'Alemitu' because to Hollie, Allie is and will always be 'Alemitu Tagese'. Hollie knew Alemitu before we decided to keep her full name 'Alemitu'. In fact, they along with my dad, were the people that helped convince us to keep her name. Alemitu lit up Hollie's world during Hollie's short visit -- thus lighting up my world.

On most nights the boys wrestle with Allie. She giggles and makes huge belly laughs as they wrestle around on the floor. At least once a week I watch this go on and I think about how Alemitu's grandfather couldn't contain his excitement when he learned that she would have two brothers. He told us that made him very, very happy. I think all three of my children light up each others worlds every single day -- thus lighting up my world.

Allie loves to talk on the phone. When Adam travels, Adam always gets to talk on the phone with his little girl. She will have a long conversation with him, and he'll sit and listen even if he can't understand a word she is saying. Alemitu lights up Adam's world -- thus lighting up my world.

On Friday morning, I went through my normal routine: Put Alemi in her carseat. Start the car. Turn the music up a little louder. Then look in the rearview mirror to watch my daughter dancing and singing. It's the simple things, but it makes me start my day off with a big smile. Allie lights up my world every single day.

We are constantly stopped in public places by people telling us how beautiful and expressive Allie is. She lights up the world of strangers, family, and friends. I can't imagine our family without her. So many people talk about what an amazing thing we did by adopting her. In fact, some of our good friends really talked about that this weekend and they even gave me a special bracelet that says "beyond" as a reminder that we have gone beyond what is typical to do something special. I'm so humbled by their sweet comments and it brought tears to my eyes, but it is me who feels blessed. I am the one that feels lucky. You want to know why? Because Alemitu lit up the face of her grandfather. Her grandfather, Tagese, loved his little granddaughter. He was so proud of her. It was written all over his face. Alemitu lit up his world from the beginning. She lit up the world of her nannies. We never taught Alemitu to have this spirit -- it is a gift from God and she has had it since birth. I don't know much about Allie's first 4 months, but her grandfather's face said it all. She lit up the world when she was born. And it is me, her adoptive mother, that is blessed to be able to have brought her into our family and be a part of her glowing and growing life.

If you want Allie to bring a smile to your face, click on the link below to re-watch the short video Adam made in February after we met our daughter for the first time. I guarantee she will light up your life today.