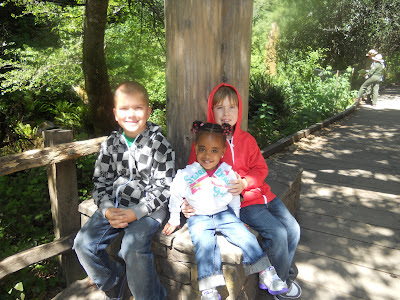 Our family LOVES San Francisco. We couldn't wait until our 8 day vacation there in May. We rented a flat that was steps away from the Pacific Ocean in the Richmond District. It was such a wonderful, wonderful vacation. The boys kept asking to move there. Wes said it was because Frisco's pizza rolls were better. Hmmm.

We spent our time at the science museum, zoo, Golden Gate park (a few times), the ocean, and Muir Woods. It was such a great break from daily life. Even though we have vacationed there in the past, there is just so much to do in that city that we have barely scratched the surface. The only bad thing that happened was when Wes got sick one night. It went EVERYWHERE, and the beds had layers and layers of thick bedding. Once Adam got him showered, we put him in the second bedroom while we cleaned up the first. A few
minutes later, he got sick all over the second bedroom. Thank goodness the flat had extra bedding, but I had to wake up every hour to switch the laundry loads from 1:30 a.m. until 10:30 a.m. The laundry was downstairs, and I was trying so hard to be quiet and not wake up the lady who lived in the flat above us. Other than that night, the week was really, really fun.


One day we drove by a house that was having an open house, and we decided to pop in. We were the only people in the house with the owner. The owner was Korean and didn't speak very good English. The entire time we were having trouble communicating. However at one point, he asked "She isn't your daughter though, right?" We said yes. He immediately puts his fingers up in a "tsk tsk" motion shaming me and saying something in Korean and laughing at the same time. Adam and I both said, "She's adopted." He felt horrible and kept apologizing, and we were trying not to laugh. So we turned around and looked out the big picture window so he wouldn't see us smile --- only to be facing an older woman in only her bra vacuuming her house across the street right in front of the open window. We left the house trying to suppress our laughs.
I can't wait to go to San Francisco again. I love, love, love that city and I really hope that at one point in my life I will be able to live there. After all, I hear the pizza rolls are great.