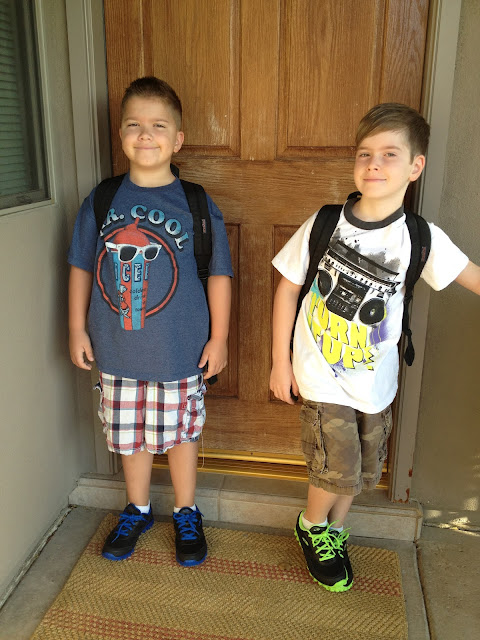 It's that time of year again, back to school! All three of my kids are in school this year. Time flies, and I tell my boys to stop getting older all of the time. They never listen though.

Palm Valley is a great school. It is in the same district as their previous school, and this district is rated the highest in the state (I believe). This particular elementary is the highest rated in our district. So I feel really good about them going to the new school. Plus, I really enjoyed our bike riding to/from school when they were in kindergarten.

During the open house, we walked all around the school until the boys were comfortable to lead us around. Their classrooms are just around the corner from each other, and their teachers are very good friends with each other. Both teachers already knew that my boys were new to the school, and that they were twins as soon as we arrived at the open house.

Since school has started, things have been going really well. The boys are enjoying it and making new friends. With them being twins, and each other's best friend already, they weren't nervous about starting someplace new. That made me feel so good. After the first few days of school, Adam and I would ask them if they talked to any kids. Calvin told me that he talked to a kid at lunch because the kid told Calvin that he LIKED jello (Calvin had it for lunch), and Calvin responded by saying he LOVED jello. Calvin was so proud of that conversation. Since then, the boys have made several new friends and friends come up to them when they arrive and leave the school.


We went to the neighborhood pool this weekend, and one of Wes' friends, a GIRL, was in the pool. She immediately started yelling out for Wes, and he immediately got super shy and wanted me to go in the pool with him. Good boy. Stay away from those crazy girls. As for Calvin, one of his previous classmates moved to this school too -- a GIRL. I'm friends with Calvin's previous teacher from kindergarten and first grade, and she told me that this girl is in love with Calvin and thinks he is really "hot". Hearing Mrs. VanDeCar describe her conversation with this girl about her love for Calvin had me laughing so hard. Calvin has an admirer.

Speaking of Mrs. VanDeCar, she has been an amazing help for me during the first 1 1/2 months of school. She is helping me through any concerns I have, looking at test scores from previous years, and offering to have lunch with the boys. She even visited their new school last year to meet all of the second grade teachers and recommend that best ones for Calvin and Wes. I miss her as Calvin's teacher (and Wes' too), but I am so glad to have the friendship with her. 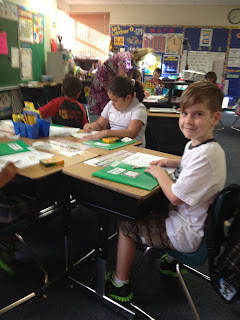 I can't forget Alemitu. My little girl started pre-school this year. She LOVES it. She talks nonstop after I pick her up, telling me all about what she did and she always repeats the words "friends". It makes me feel so good to know that she is super excited about school.

Alemitu has also decided to completely potty train herself this month, as well as move to a "big girl" bed without issue. This is happening too fast!! When I was building the bed for her, she was all excited. However, when I moved her blankies and animals over, she started freaking out, crying, and trying to put them all back in her crib. I stayed in her room with her for 10 minutes until she calmed down, and then I left completely expecting her to get out of bed. Nope. Every night stays in her bed and loves it. She always yells "I did it!" in the mornings when I wake her up. She runs to her bed for nap and night time. She loves it! The other day, I heard my mom singing to her on the monitor. I realized she had gotten a book off of her bookshelf to read in bed (my mom had recorded a song on it). So she knows she can get out of bed, but she chooses to stay in it. Pretty cool. And potty training herself? Awesome. She still wears a diaper for nap and night time, but just out of the blue one day she began asking to go on the potty every time.

My kids are growing up, but I am so, so proud of them.


Posted by Sabrina Fischer at 10:20 PM No comments: