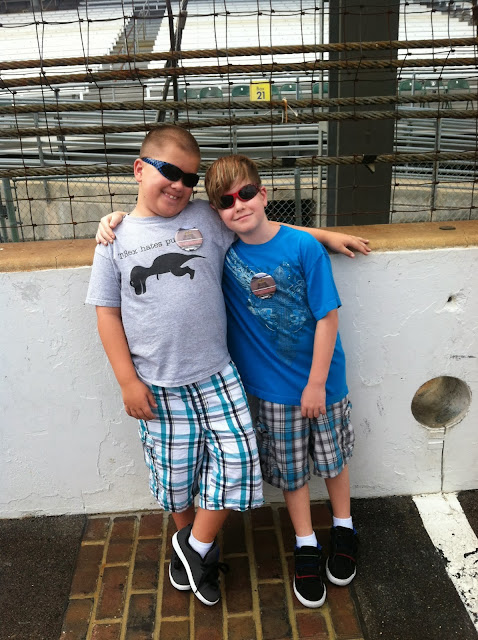 I cannot believe that the boys turned 8 this summer. I can't believe how fast they are growing up. I always threaten to ground them for life if they keep getting older. They don't listen.

This year we celebrated their birthday a few times. We had a party for them in Hilton Head Island on vacation. We had a party at our house with friends, and they even had a couple of friends sleepover. We also went to a Phoenix resort that has a big waterpark with a few water slides. They loved every minute of it.

Calvin is just an amazing kid. He never, ever gets frustrated. That kid can sit and build legos all day long and never once get upset if his creation keeps breaking. Just the other day, Adam asked Calvin to put together an easel for Alemitu. Calvin went through the instructions, used tools like a screwdriver, and never once needed any help. He has the most patience of anyone I know. You'll never catch him breaking a rule at school, but you'll also never catch him finishing a test or assignment before anyone else. He told me a few weeks ago that he finished a test in the office that day at school "because I like to take my time and make sure I am right . . . unlike my brother Wes." And he said that comment out of the side of his mouth. The boys are so very different, but they get along so well because of that. Sometimes I want to set a timer to speed Calvin up (he wouldn't move faster even if our house was on fire), and sometimes I want to set a timer to slow Wes down (i.e. he can't finish taking a shower in under 30 seconds).

Calvin is a happy, healthy kid. He reminds Adam a lot of himself, and he looks a lot like Adam too. Calvin will always be completely honest with you without issue, but sometimes he will crack a sarcastic joke that will have me laughing for days. He is motivated and determined to accomplish individual tasks, such as lego building or rock climbing. At a recent birthday party for a friend, he was the first one to shoot up a rock wall before all of the others made it. He then went to a much harder wall and really struggled, but wouldn't give up until the workers made him come down. A few minutes later, he was working on that same hard wall again. Calvin won't do what is easy, that bores him. He likes an individual challenge, and he is really good at them.

Some things about Calvin:

What He Wants To Be When He Grows Up: "I don't know." I asked him this question about 5 times, and he thought about it all 5 times, but always responded "I don't know." That's my Calvin. Never feels pressure to provide an unsure answer.

Favorite Thing To Do:  Play the Disney Infinity game on Xbox. I've had to start putting a time limit on game play because both boys are so into this game. I recently told Adam that I've reached the moment when I feel like a 'mom' because I will put a time limit on game play, and then make them play outside for a while. When Calvin isn't playing the game, he is drawing the characters on paper.

Things That Make Him Happy:  Playing with Todd. Todd is a stuffed turtle. Wes has a stuffed monkey. They treat Todd and Monk like their own children. Every thing they do includes Todd and Monk. Calvin also likes dancing, and he likes having hair with a long bang by his eye. He loves that bang and never wants me to cut it.

Things That Make Him Sad:  Not getting to play Disney Infinity whenever he wants. Then he gave an example, "Like when Wes is grounded, and so I don't play as much because I'll play with Wes instead."

Dream Place to Live:  In a house with stairs

Wes is just as amazing. His imagination is huge. He always likes to be in character (whatever character it is at the time). He can trash talk my parents in games, but he doesn't ever get upset for losing. (He does try to cheat though. Adam blames that on his Grandma Allen.) Wes is a tough kid. He wrestles hard, but he likes you to wrestle back hard. We will often punch each other in the shoulders pretty hard when we are playing. A few weeks ago, Adam and Wes had a big wrestling match. Adam started spanking Wes and asked Wes if he knew what a spanking was. Wes said, "Yeah, it is what mom used to get when she got in trouble on her birthday." Okay, so he isn't very clear on the difference between a punishment spanking and birthday spanking. However, the next day when his friend was over at our house, Wes announced "My dad was spanking and hitting me last night!" His friend was quiet. Thank goodness I was in the other room to inform Wes that he needs to state we were PLAYING last night. Wes had no clue he was saying anything bad. Oh dear. CPS will knock on my door any day now.

Wes is a fun kid, and he is so curious about everything. He still has anxiety issues over time, dinner, and plans, but I have seen quite a bit of improvement the last few months. He is dealing with some stomach issues that we are working out with his doctor. Other than that, he is very healthy. Wes is a tank, but the doctor said due to the fact that his growth chart has remained completely consistent, then this is just his genetic make-up. Adam calls Wes "Jerry Junior" (my dad) because Wes looks like my dad (and me), and he acts like him too. Wes is definitely from the Allen side of our family.

Some things about Wes:

What He Wants To Be When He Grows Up:  Live in the forest like a monkey

Favorite Thing About School: They serve breakfast in the class.

What Makes Him Sad:  When Monk is getting washed

Dream Place to Live: In a forest

I am so proud of my two boys. Here's to another great year ahead. But stop growing up!!

Posted by Sabrina Fischer at 9:34 PM No comments:

We love our new house and neighborhood. This was the best move we have ever made. In spite of moving to the city, we have the closest neighborhood feel that we have ever had. I am constantly running into people at stores, school, etc. that we have met since moving here. I find myself saying "what a small world" often.

Most people that live in this area are here to stay. They have found their dream home, and it isn't what we are used to in the suburbs with people moving all the time (including us). The boys have found great friends at school, and a best friend their age that lives down the street. Their friend, Sullivan, is at our house most days (or the boys are at his house). Sullivan is the nicest and most respectful 8 year old child I have ever met.

I cannot say enough great things about this neighborhood and community. We love, love, love being here. I also didn't realize how much I love mountains. Our community is surrounded on 3 of the 4 sides with mountains. We are anxious for the weather to cool down so we can go on the many hiking trails. When I am in my kitchen, I look out my window at the mountains. There are mountains everywhere I look, and I enjoy their beauty daily.

Even though our house needs a lot of remodeling, we still love it. We have finished the first phase of major remodeling, and we hope to begin the next phase sometime in the spring of 2014. In the meantime, there are a ton of small projects to do around the house that also keep us busy. This house and neighborhood are just so comfortable and inviting. I never thought moving INTO the city would provide such an amazing atmosphere. We just love it so much!

Below are some pictures:

Posted by Sabrina Fischer at 10:51 AM No comments: