Two Turtles and a Pony 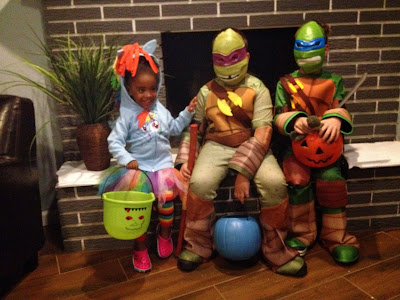 We had a fun Halloween this year. In early September, I started asking the kids what they wanted to be for Halloween. The boys would change their minds each time. I told them that once they could stick with a character for at least a week, I would then order the costume. They finally settled on Teenage Mutant Ninja Turtles.

Alemitu went a different route. She wanted to dress up like "Halloween". No matter how many times and ways it was explained, she continued to argue, and get quite upset, because she wanted to be "Halloween". Normally it would go something like, "Yes honey, we are going to dress up on Halloween and get candy, but do you want to be a princess, Doc McStuffins, a pony . . . ." I would be cut off mid-sentence by an angry 3 year old yelling, "I don't want to be a princess, I want to be HAALLLOOOWWWWEEEEEEEEN!!!!! Whooo- Whoooo" (as she pretended to act like a ghost or zombie) So then I would say, "So you want to be a ghost?" Now here come the tears and stomping of feet. "I WANT TO BE HALLOWEEN!!!!" Oh dear. After a month of this, I decided to have her watch me buy the costumes for the boys. She then wanted a costume too. We saw a few options, and she picked Rainbow Dash from My Little Ponies. (And that's a completely different story, about how we argue that it is HER little pony, not MY little pony. We finally have agreed to share ponies, and she is satisfied with that. She has no understanding that MY Little Pony is the title, and I'm not actually calling the ponies mine.)


Our street, and the one it "Ts" into, have a block party in a cul-de-sac. It is put on by some empty nesters, and the neighbors look forward to it every year. They block off the cul-de-sac and set up camp. Lots of chairs around a big fire, and tons of food and beverages. It is pot-luck style. A few adults take the young kids out trick-or-treating, but otherwise, everyone hangs out in the cul-de-sac for the night.


I was surprised at how many trick-or-treaters our neighborhood had. Since we would be at the party, I set out a huge bowl of candy, knowing I had bought way too much. Unfortunately, within about 10 minutes, it had been taken by some greedy, little children. :-( Our neighborhood was crawling with trick or treaters. Adam, myself, and another mother (Sullivan's mom) walked around the neighborhood with 11 boys and 1 girl -- Alemitu. After more than a mile, the boys were starting to get tired and so Adam grabbed the truck, we all loaded in the back, and slowly drove back down our neighborhood street to the party. The boys thought that ride was the coolest thing ever. (Myself and Sullivan's mom were sitting on the tailgate as we drove to make sure the crazy boys didn't act too crazy.)

The weather was wonderful. The kids had fun. The adults had fun. It was a great Halloween!

Posted by Sabrina Fischer at 9:58 AM No comments: