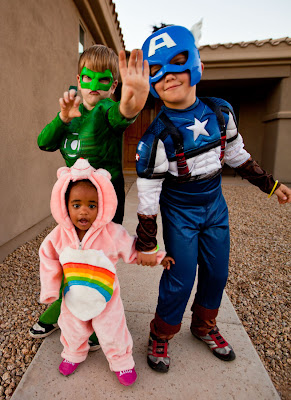 We had a great Halloween this year! We looked at tons of costumes, but the boys were adamant about having Captain America and Green Lantern. As for Allie, I chose a Care Bear costume because that is what she watches on television when I style her hair. I picked the Care Bear that I used to have as a kid - Cheer Bear. She loved wearing her costume.

A few days before Halloween, I took the kids to a local Halloween festival at the Goodyear Ballpark while Adam was in Mexico. We went with my sister and her family. Uncle Zach dressed up as Mickey Mouse (Chloe was Minnie Mouse), and he pulled Allie and Chloe in the wagon the whole night. The boys got to go on some rides and enter a costume contest. We had a great time. 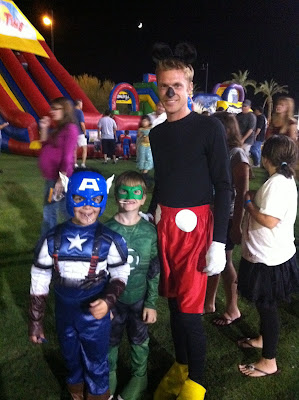 On Halloween night, Mickey Mouse pulled Allie and Chloe in the wagon again. Allie has always been especially fond of my sister, and she just had so much to say to Jenna. We have no idea what most of it was, but every time the wagon got close to Jenna, Allie started chattering away at her. Chloe held on for dear life. She did not trust her daddy pulling that wagon and she had the tightest grip on the sides of the wagon for most of the night. Towards the end, Allie directed her conversation to Chloe and they talked a little bit. 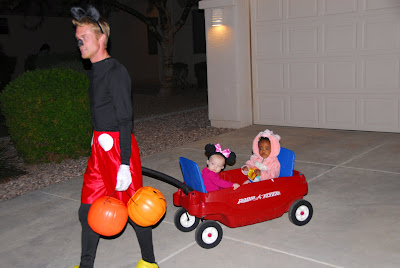 The boys were so excited for Halloween. Wes kept writing about it at school for two weeks leading up to the holiday. There was no hesitation as they went door to door. They even learned to say "Trick or Treat. Smell my feet. Give me something good to eat." They couldn't believe how much candy they got and they were super excited. The fact that they both don't really like chocolate didn't seem to bother them. They just enjoyed collecting the candy and spending time with all of the family that came along.

It was a great night, and we ended it by drinking hot cider on the patio. 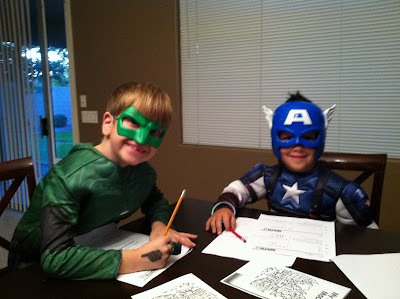 The boys pretended that super heroes were doing Calvin and Wes' homework.
Posted by Sabrina Fischer at 9:31 PM