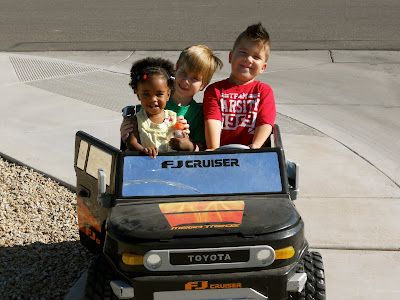 The weather is finally starting to feel like fall in Phoenix! We have been to the park several times, on a few bike rides, and today we spent quite a bit of time playing outside on the bikes, scooters, skateboards, and power wheels car. I love fall! 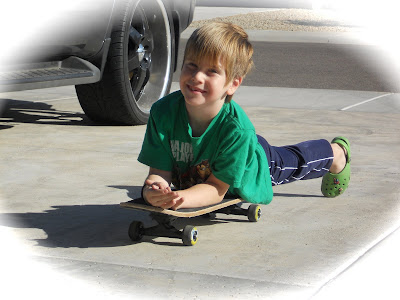 Yesterday I went to the boys' school for parent/teacher conferences. The teachers had great things to say about both boys. I did hear two great stories from Calvin's teacher that Adam wanted to make sure I wrote down so we wouldn't forget.

1. There is this "bad" kid in Calvin's class named Rowan. The boys always talk about how Rowan gets in trouble every. single. day. They describe Rowan's behavior very dramatically. Anyway, I was surprised when Calvin's teacher said that when she has the kids in her class choose partners, Calvin chooses Rowan over his very best friend, Levi. What? After he did it a few times, she asked Calvin why he would keep choosing Rowan as a partner. Calvin replied, "Because he is bad and I am good, so maybe I can show him how to be good." How sweet. I am so proud of my little guy!

2. In Calvin's class, a girl announced that she was adopted from Korea. A student asked her what adoption meant. She didn't know. Calvin raised his hand and said very matter of factly, "Well, we adopted our sister. Her mommy and daddy couldn't take care of her, and my mommy and dad could. So, uh, we just went and took her." :-) Not very politically correct, but Mrs. VanDeCar said it was such a perfect explanation in first grade language. I didn't even think Calvin knew what adoption meant. I'm so proud that he has developed the self-confidence over the past 1 1/2 years with Mrs. VanDeCar to be able to share these things with the class. Prior to entering into first grade, his answer was "I don't know" to everything. Again, we are so proud. 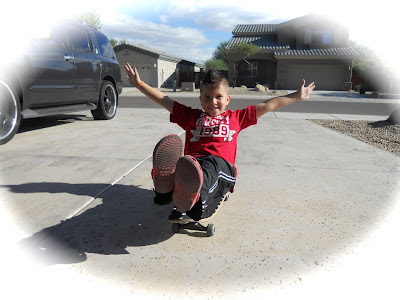 Wes had a great conference too. His teacher doesn't share as much as Mrs. VanDeCar, but she did tell me that Wes is a great kid. He got 100% on most of his tests and she kept saying, "Nothing to be seriously concerned about here." Um, I don't think you can get better than 100% so I'm pretty sure I'm not concerned at all, let alone seriously concerned. Oh well. She is growing on me, and Wes really likes her. I think Wes was nervous about his conference because that was one of the first questions he asked when he saw me. I told him that his teacher thought he was doing great and that we only needed to work on a few things, and his face lit up and said "Really?" Wes is such a sweet, sweet boy always trying to make his mommy and daddy happy. 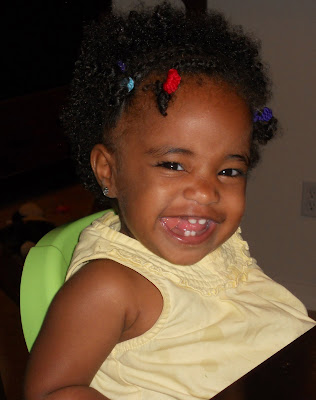 Allie is still just as happy as ever. She is repeating so many things we say. She says things on her own like "Thank you (day do)"; "here you go (here doe)"; and she even said "pweas" instead of blowing a raspberry. Pweas only lasted a few minutes before she was back to blowing raspberries. She is learning smaller words every day like ball, truck, brother, etc. but most of it is her repeating the sounds rather than her retaining the word and its meaning. She loves to tell you where the kitty (dee dee) is, and where the doggie (dah dah) is, and always, always, always she will tell you where her cousin Chloe (doe dee) is. She still won't consistently tell you where mommy and daddy is though. :-) Silly girl. Also if you ask to change her diaper, she make a run for it. Then she'll turn around a few feet later just to make sure you think she is funny. I just love to watch how she grows each and every day.

The funniest thing she is doing now is shaking her head "no" and saying "uh-huh" to every, single question you ask her. She can differentiate between a question and a statement, and every question will be answered with a "no". She'll blow a raspberry and say "please" for some more milk. Then I will ask "do you want some more milk?" Shake her head and "uh-huh" comes out. The boys are trying to teach her to say yes. She isn't grasping that concept just yet.

She is also still having issues with eating solid foods. She has stopped gagging and throwing up, but she just doesn't have a whole lot of interest on most days. Other days, she will eat anything you give her (i.e. peel and eat shrimp) I'm quickly learning that it is easier for her to eat off of my plate than to put it on hers. Scrambled eggs on her plate - Yuck! Stealing scrambled eggs from mom's plate - Delicious! She is getting better though, and it is just going to take some time. 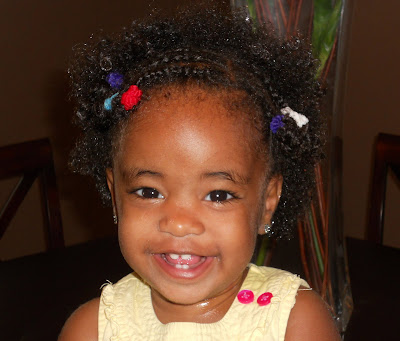 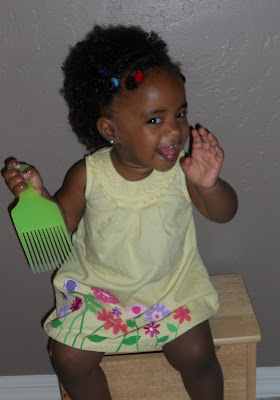 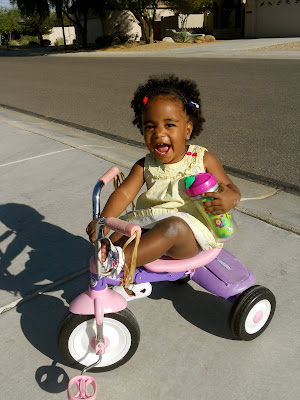 Adam has been and will be traveling most of this month so I'm playing single mom. I am so blessed to have such great children that help make this single mom business really easy. Poor daddy sure does miss his munchkins and is always asking for pictures, video, and phone calls.
Posted by Sabrina Fischer at 8:48 PM