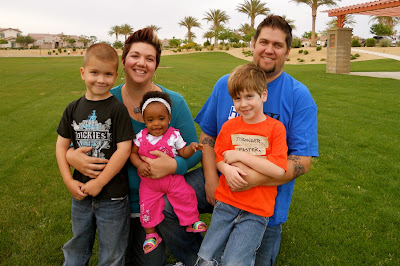 We have been home for over a month and we finally got a picture taken with all five us of in it! Thank you Zach!

We've had another good week. Yesterday was my 31st birthday. I'm officially "in my thirties". My life is far from what I had imagined for myself when I was 20, but I love it! It is actually better than I had imagined it! One thing I swore I would never, ever, ever have is 3 children. Never. And now I am the happy, proud mommy of 3 kids. We all have things about ourselves that we wish we could do better or personality traits that we battle on correcting every day -- but I can easily say that being a mom is what I do best! My kids make it easy for me. They make me laugh and smile everyday. So this year, I just wanted to spend a quiet birthday at our favorite place -- the "green" park (boys named it because it has green slides).

So last night Adam drove 30 minutes to get my favorite food from Chino Bandido (Chinese/Mexican dive). Then we packed up our dinner (in my new cooler I got for my birthday from Jim & Sherree) and the kids and headed to the green park where we met my sister, brother-in-law, and niece. We do this about once a week but it is my favorite thing to do. The green park is a really nice park with a large playground, several picnic tables, and a huge grassy area. It is surrounded by HUGE homes that haven't been finished because the housing market went upside down -- so we always have this beautiful, secret park to ourselves, and it is about 1-2 miles from our house! We had a nice dinner and then ended the night playing tag with the boys on the playground. I am so blessed!

Speaking of tag, I am baffled about something. I run on the treadmill several times a week. I stink at running. I hate it, but I always thought it was mental. When we taught the boys how to ride bikes, Adam said that he noticed I don't take long strides and maybe that's my problem. I tried and failed miserably. Don't get me wrong, I realize that I'm overweight and not in the greatest shape. BUT, I really do run on the treadmill several times a week and have done this for years. In addition, my legs are twice as long as Wes' legs. He's five. The problem: I can't beat my 5 year old in a foot race. I run as fast as I can and I can't do it. My parents can do it. My dad even turned around at one point to see where Wes was, but I run straight ahead and I can't beat the kid! Wes thinks it is hilarious and loves to try to race me. He's "slightly" competitive. Ha!

As for Calvin, that kid is just funny. We got report cards a couple of weeks ago and his teacher just wrote beautiful things about him being a role model for the class, etc. Calvin is really independent and just does his own thing. He loves to dress himself and add accessories to his outfits. The other day he picked out his Mario hat and a pair of fake glasses. I just had to take his picture when we got to school. A few weeks ago it was a Buzz Lightyear huge space rain jacket thing that he wore to school in 80 degree weather. He loves dressing up! 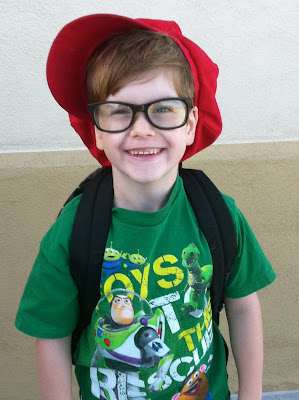 This week Adam's grandparents are coming into town and my mom is also visiting for a few days on an extended layover on her way back from Thailand. We are excited for everyone to visit!
Posted by Sabrina Fischer at 9:07 PM