This Is What We Are Up Against 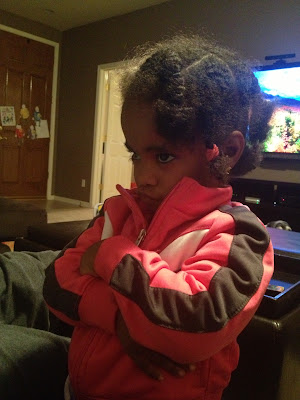 This is what we are up against. Alemitu is 25 pounds of attitude. We love it, and we are absolutely terrified of it. She makes our lives interesting, and I couldn't imagine having her in our lives without the attitude . . . but I am so terrified of what's to come.

Alemitu never misses a beat. She is so quick to pick up on things, and she has no problem shaking that finger at you and letting you know who is in charge and how things are going to work. (I blame her brothers because they give her anything she wants.) Recently, she has taken a break from finger shaking and decided to start staring us down. When she doesn't like what you have to say, she will slowly begin to cross her arms, lower her head, look up at you with her eyes, and glare. She will stand that way for the longest time. It is so hard not to laugh.

She began doing it a few times each day so I kept my camera handy in hopes of getting a picture. The one above was after I told her it was time for bed. Glare. After a few days, I told her that she didn't scare me. She thought that was hilarious and began laughing and saying "Alemitu scare mommy! Alemitu scare mommy!" The next day, I just glared back at her. She broke out in laughter after that too. She then decided that her scary glare wasn't very scary and thus not effective. So she went back to the finger shaking. Every once in a while we still get that look.

Because Alemitu has so much attitude, sometimes we have to be tough on her when she doesn't want to follow our rules. She doesn't scream and throw fits or anything like that. She just simply says things like "Um . . . . no" when we ask her to do things. She weighs her options to decide if she wants to do what she is told . . . she is her mother's child if I am to believe the stories told about me. (Surely not.) Time out doesn't seem to faze her. She finds a place to sit, and then she plays with the carpet, her hands, or the wall. No big deal. I mentioned to Adam that we might want to introduce the corner (an idea I got from my sister). Adam at first couldn't imagine doing that. He felt it was way too archaic. Well  . . . a few days after he returned home from a business trip, I got the following picture when I was away at work. She was not happy, but it worked. 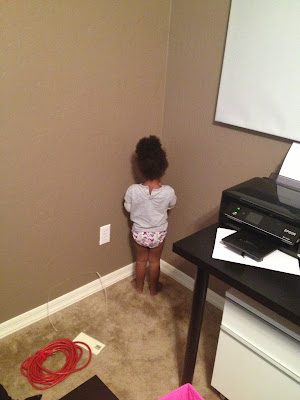 While I may be slightly terrified of her attitude, I am thankful that she does listen most of the time. And I'm even more thankful that she puts more energy into having a good, hyper, loving, silly, singing, dancing, super loud talking attitude. She may be 25 pounds of attitude, but most of it is a kind of attitude that will brighten anyone's day.

As a funny sidenote, about an hour after I received the "standing in the corner" picture from Adam, I also received the following pictures. Poor Adam. It was kind of a rough daddy/daughter day. 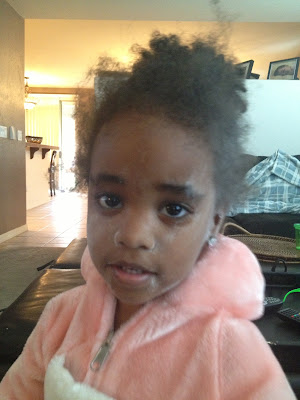 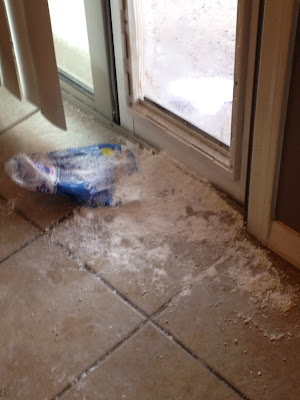 Posted by Sabrina Fischer at 11:14 PM