Adam and I have a pretty bad history with having fish for pets. We always think it is a great idea, but it isn't. It is a horrible idea! And our stupidity (i.e. not realizing you can put fish in a cold bowl of new water while you clean their tank) always kills the fish. For the past 10 years, I have had a very strict rule -- NO FISH!

Well it was my idea to get Alemitu her fish. But this time we were going to keep it simple. Just one little goldfish in one little tank of water. Seems simple right? Wrong.

On Christmas morning, Alemitu was super excited to discover her fish. She kept wanting to touch the fish and play with it. We were so excited that she loved the goldfish ("Goldie"), and we were even more thrilled that we had picked out a tank with a lid so she couldn't touch the fish on her own.

The fish had a great few weeks, but one night Adam told me that Alemitu may have overfed Goldie a little. We joked about how it would be our luck to find the fish dead in the morning. Turns out -- if you overfeed a fish, the fish food takes the oxygen out of the water and kills the fish. Crap.

So after work the next day, I head to the pet store to get a new fish. Instead of a boring old goldfish, I buy a pretty fish with orange and white stripes. I think this is a great idea until Adam asks me how I'm going to explain the change of color to Alemitu. Simple. We got a new fish and the other one went bye bye. She's 2. I showed Alemitu her new fish and immediately she began asking for her old one. Crap.

After explaining that the old fish went bye bye so that the new fish could live with us, Alemitu was once again excited. We had to clean the fish tank before we could put the new fish in it. Alemitu was so upset that she had to take a nap without the fish in the tank. We had the fish in a bowl in the kitchen while the tank (in Alemitu's room) was warming up. When Alemitu wakes up from her nap, the first thing she wants to do is check on the fish and put it in her tank. So we run to the kitchen to see the fish, but there is no fish in the bowl!!! The fish was on the kitchen floor after jumping out of the bowl to its death. This is an all too familiar scenario for Adam and I. Crap.

I was able to distract Alemitu (who hadn't noticed the dead fish on the floor) by telling her the fish wasn't ready just yet. Adam booked it over to the pet store and bought a third fish that looked exactly like the second. Problem solved. New fish went into the tank, and so far, so good. I am sure that it will only be a matter of time though. 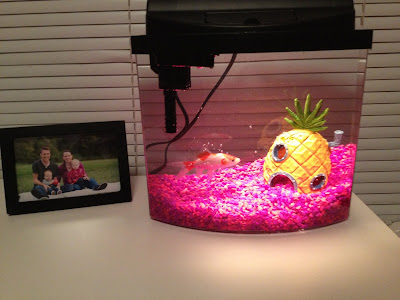 Posted by Sabrina Fischer at 9:27 AM