I can't believe it is spring already. We had a great winter. Here are some pictures: 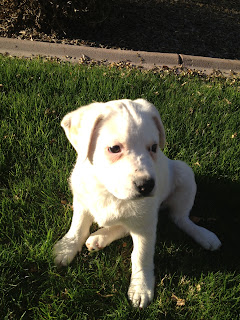 Our old dog Clementine has no interest in playing with the boys. She is 12 years old and sleeps all day long. The boys have taken an interest into dogs, and so we decided it was time to get them their own dog. Adam and I were both hesitant about this. I specifically said I didn't want a dog younger than six months; one that would be large; and one that was a light color (new brown couch at home). Well, we bought a 9 week old puppy, that will be very large, and will have long, thick white fur. Yep, I'm a sucker.

The boys have really enjoyed their dog . . . "Scooby" . . . a girl. They play with Scooby a lot, and Allie is enjoying her more and more too. She LOVED Scooby at first and then HATED Scooby. Now she wants to be around Scooby all of the time, but still starts to get upset if Scooby is hyper and running around.

Our old dog is doing okay too. She loved having Scooby at home, but now she gets annoyed on occasion - especially since Scooby has already doubled in size. Clementine still doesn't want her personal time though, she prefers to have her eyes on Scooby at all times. This timing was perfect because a week after we brought Scooby home we found out that Clementine has cancer. The good news is that it is slow growing, but it is still cancer. Some days I love Scooby, and some days I think "what have I done?" I guess this is Karma for when Adam surprised me with a cat for my birthday -- and never asked my parents' permission. At the time, I couldn't understand why my mom wouldn't just fall in love with the amazing new kitty. Yep, karma.
2. Sickness continued in our house through February. Wes got so sick in January that I couldn't even leave the house. Trust me, I tried. I tried to bribe him with a trip to Toys R' Us, but nothing could get him to move off of the couch. Unfortunately Adam was out of town that week and our refrigerator broke down and all the food was bad. We drank soda and ordered pizza twice, and then a great friend brought us a chicken nugget tray and gallon of lemonade. She even offered to go to the grocery for me, but Wes was finally on the mend. I was definitely overwhelmed those 3 days, but I learned (after getting lectured by a few friends) that I need to work on asking for help sometimes.
As for Allie, she gets sick in style . . . 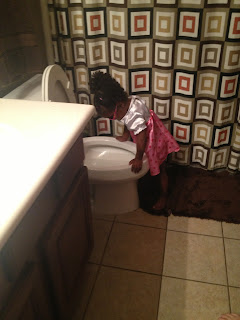 3.  The boys started riding the bus to and from school. In kindergarten, riding the bus wasn't worth it. It would take us longer to walk to the neighborhood gate to wait for the bus than it was for me to just drive to the school. Plus we liked to ride bikes. Okay, I'll admit it -- I couldn't imagine my poor, helpless, confused, scared little boys on a big, bad bus. In 1st grade, we got a variance to keep our kids in the same school, and so we had to drive 10 minutes to/from school. No bus options. And now in 2nd grade, I have run out of excuses. The boys were curious about riding, and I couldn't think of a single reason why they couldn't. So, I hesitantly said yes. And now I wonder why the heck I didn't do this sooner. Having the kids ride the bus is awesome! No more showing up to school and fighting the new pick-up system. I . . . I mean the boys, love it!

On Thursdays, the boys stay late for a drawing class, so I still pick them up on those days. One afternoon, I went out to start my Jeep to run a few errands before picking them up. My Jeep wouldn't start. Dead battery. Adam was on a shoot and couldn't be reached. My sister and brother-in-law were selfish and moved away from me so they can't be here to rescue me at my beck and call. And, I hate asking for help so I didn't even call the friends and clients that live within a mile of me and would not hesitate to help me out. So... it was time to try out the golf cart. I didn't know how much battery remained, but I gave it a shot. I drove to the store, to the post office, and to my work. It started slowing down on the way to school. Crap. I picked up the boys and they told me they would just push it if it died. I explained that there is no way they can push this thing. Well sure enough it died about .5 miles from home. And sure enough those boys were determined to push the golf cart. And they did. I was laughing so hard that tears were rolling down my cheeks. For a while, I even sat in it as they pushed me (their idea). Cars were driving by us and staring as a mother is laughing while her young children push her in a golf cart. We came home so sweaty, but we had the best time ever. 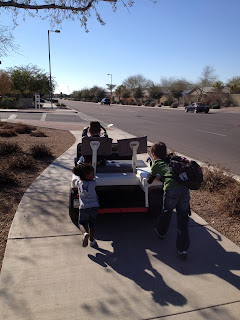 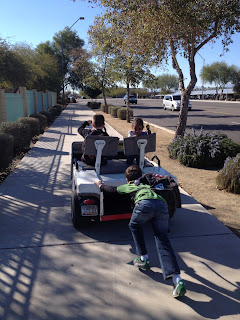 4.  It snowed! One day we had a freak winter storm and it actually snowed in Scottsdale. This is a picture taken by Adam's office.

5. Grandma came to visit for a few days in February. My mom said we were "on the way" to her business trip in San Francisco. (And my other sister, in Texas, was "on the way home".) I'm not complaining though, we love these little visits. I am so very lucky to get to see my family as much as I do. We went to the park a few times, and we also went hiking on a new trail. And as always, the boys "kicked her butt" at Wii games. It was a great weekend. The kids always look forward to these visits, and it is so hard to say goodbye. Alemitu really has a hard time with it and will usually start crying. It breaks my heart. 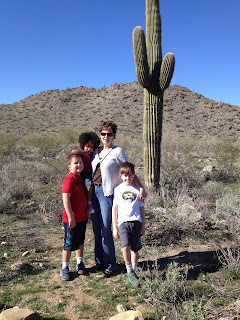 6.  Alemitu has learned that she can get out of her bed and play while she is supposed to be napping. If she hears us coming, she'll run back in bed and pretend she is asleep. One night we could hear her playing with toys in her bed. (Her bed is usually filled with toys under the covers.) She kept playing with this electronic telephone. After about 10 minutes, Adam went in there, and she immediately tried to hide. He said, "Allie, you need to go to bed." She kept trying to hide, but was looking back over at him. He said, "Were you talking on your phone?" She said, "Gamma call me daddy." It's all gamma's fault.

Like I said, we had a great January and February. March gets even crazier with a lot of changes . . . but I'll post about all of that soon. :-)
Posted by Sabrina Fischer at 11:20 PM