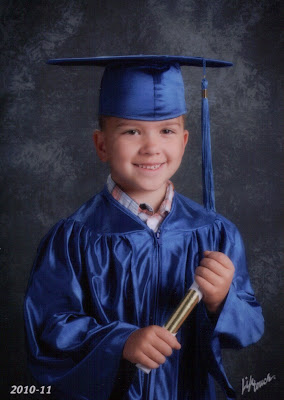 My boys have graduated from Kindergarten!! They had a graduation ceremony yesterday, and today they went to their 1st grade class for the day. I am officially the mother of first graders!! I was so, so sad when they left for kindergarten, but I am so, so happy for them right now!

This has been a wonderful year for both boys. Let me start with Calvin. Last year, his pre-school teacher told us that she was "on the fence" about recommending he start kindergarten. He would be a young 5 year old, and she felt he had some confidence issues. She said she is pretty sure that he knows the material, but he always says "I don't know" when asked. After talking to several teachers and the principal of their current school, we learned that since the issues weren't behavioral and maturity, then it would be best to go ahead and start him in kindergarten. Nervously, we did.

In the beginning of school, we were also told that Calvin had scored ZERO on his first DIBELS test before entering Kindergarten. Again -- was it because he didn't know it, or because he was too shy? Calvin's teacher caught onto this real fast and she helped bring him out of his shell. It was simply a confidence issue. When I got Calvin's report card today -- he met all expectations for Kindergarten. He exceeded in a few areas of math and drawing, which doesn't surprise us at all. Calvin can look at an object and draw it very well. His DIBELS test scores were all above average. We are so, so proud of him!

Whether it was his teacher or a substitute teacher, everyone always complimented Calvin. He never got in trouble or reprimanded one single time at school. We were told by several teachers that he was extremely well liked in class and a great role model. Calvin loves his teacher, Mrs. VanDeCar, and I believe the feeling is mutual. She is always telling me Calvin stories, and she always talks about how much she enjoys having him in class. We were hoping we could get a first grade teacher that would be as good as her, and a few weeks ago she pulled me aside to let me know that she was looping up with the class. If we wanted, she could be Calvin's teacher again. YES!!! 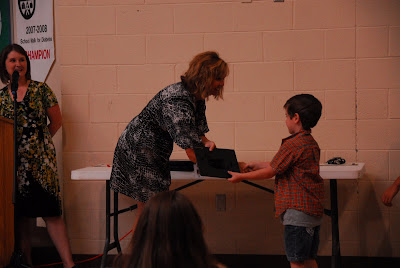 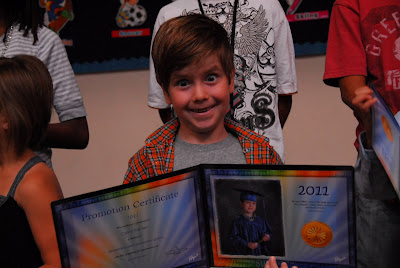 We are just as proud of Wes even though we knew he was ready for kindergarten. He had a great year! He scored very, very high (one even off the charts) for his DIBELS test score. He loves to sound words out. Sometimes we will be in mid-conversation, and he will stop to sound out a word. His favorite subject is Art and he was so sad when he had the flu and missed art class. I promised him that we would have our own art class this summer, and Adam is already looking into other art classes for the kids. As you can imagine, being self-employed in creative fields, Adam and I both think that Art is the most important thing you do in school. It is nice to see that both boys enjoy it so much.

Wes met his new first grade teacher today, and he said she was really nice. He is really proud of himself for being a first grader. Just a few minutes ago, I learned from the next door neighbor who was a 1st grader this year that Wes' new teacher yells a lot. Ut-oh. :-) 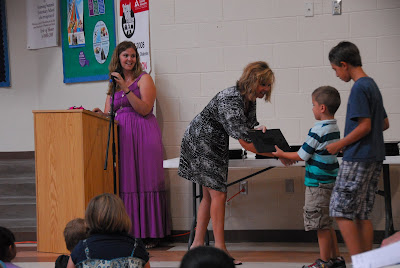 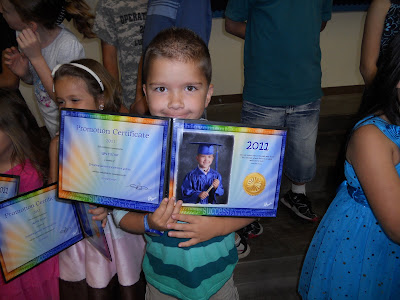 We had a really, really good school year with only some minor bumps in the road. It ended on a great note too -- both boys got Student of the Month this month! I am so excited to get to spend more time with the boys this summer and we have all sorts of stuff planned. Wes' first plan is to stay up until midnight tonight. 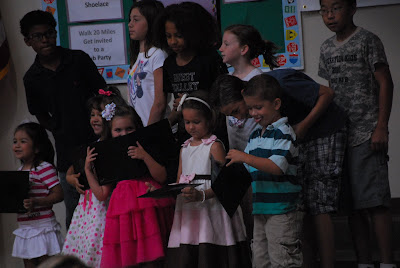 Calvin is Student of the Month, next to proud teacher Mrs. VanDeCar 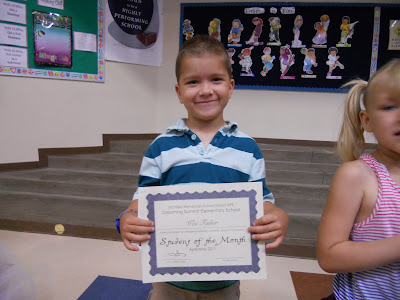 Wes showing off his Student of the Month certificate
Posted by Sabrina Fischer at 11:43 AM