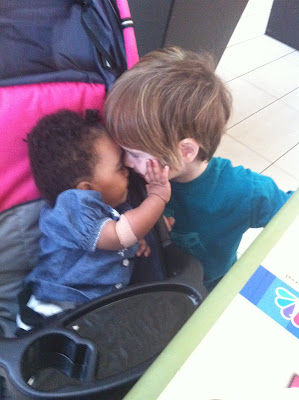 On Saturday what I thought was bad food from Texas Roadhouse was more likely a bug of some sort from Ethiopia. We had some questionable fruit and Ethiopian airport food right before we left. I spent the past two days either having food go right through me or throwing it all up. It left me tired and achy and it was pretty rough yesterday. Last night Adam sent me to our bedroom in the evening and he took care of the kids. I fell asleep at 7 p.m. I was up several times throughout the night with cramping, but I woke up this morning feeling great and ready to start my day fresh and get some things done! We were going to go to a quick doctor's appointment for Allie in the morning and I was going to work in the afternoon. Those plans went completely down the drain and we spent the day at the doctor's office and at several different lab facilities. I should first thank my wonderful clients who let me reschedule them at the last minute for Wednesday and Friday instead!!

We arrived at the pediatrician's office at 10:15 and didn't leave until 2 hours later. We love Dr. Spiekerman!- We started going to him when the boys were 7 or 8 months old (we didn't like their first doctor). He is a straight shooter, and he is also very proactive. He evaluated Allie today and then asked if he could step outside and think about her case a little and then come back in with a plan. His office was right outside our room and we heard him discussing her case with someone the entire time. It was well worth the 2 hour visit! (We also heard him go into the other rooms to apologize to the other waiting patients . . . oops.)

To sum it up, he is happy with her status as an internationally adopted child. She cried while he examined her and he was thrilled with that. He kept saying that she must have been in a good place that cared for her because she knows to cry to let you know that she is unhappy with something. A lot of kids from orphanages don't cry anymore because they have learned it does no good. He kept saying how happy he was about that. He also said her head size is large (even though her body is tiny) which is a good thing and shows that she had adequate nutrition in the womb and after birth. She weighs 15 pounds which is what she weighed in January.

Good news: he doesn't think she has a tumor at all, he thinks it is a capillary hemangioma -- which is essentially exactly what we had originally thought (a strawberry birthmark), thanks to my niece Chloe having one like it. So I feel much better about that.

Another "minor" concern we had was her flexibility in her legs. The girl is a contortionist! I thought this was normal for all infants. Within minutes of being back in the hotel room and I was changing her diaper (during our layover in D.C.), my mom said, 'I think her leg is dislocated" because she could move it so high up. My dad couldn't believe the way she moved her feet and ankles. Hmm. So I guess this isn't normal, but we just thought maybe it was because she doesn't have a lot of muscle mass in her legs from being in a crib so long. In fact, she didn't put any pressure on her legs to stand in January. She does a little now and I work with her on it several times a day.

We thought this was minor but decided to bring it up. This was Dr. Spiekerman's major concern. He rattled off things like it possibly being spina bifida or a tethered spinal cord. It shocked me for a minute but then I realize that it doesn't even matter. We'll deal with whatever cards we are dealt, and I wasn't concerned. Towards the end of the visit he did rule out spina bifida but we still had to get an x-ray for possible hip dysplacia. He did also confirm that there is a chance it is just low muscle mass from being in a crib.

Our major concern was her cough. She has had a nasty cough since we saw her in January. Her medical records from October said she had an upper respiratory blockage and was treated for that. Dr. Spiekerman couldn't hear anything wrong in her chest and thought it was just post nasal drip, but he did order a chest x-ray to confirm this. Very quickly after the x-ray was finished, Dr. Spiekerman's office called Adam to tell him that they did find an infection in her lungs and they called in a prescription. So we feel much better because we knew that it was more than post nasal drip.

Dr. Spiekerman also ordered 11 different blood tests and 6 stool tests. So after 2 hours at his office, we went to get both of her x-rays done, and then we went to get the blood tests. Unfortunately her veins are so tiny they had difficulty getting blood to flow. So after poking her in each arm (oh yeah, did I mention that Dr. Spiekerman's office gave her a few shots too), we were told that they only could get 2 of the 11 blood tests. So we were sent to the Phoenix office to see a specialist for drawing children's blood.

We rush to pick the boys up from school and then head out to Phoenix. After seeing the band-aids on her legs from the shots and the wraps on her arms from getting the blood drawn, the specialist was really hesitant about poking her again. However, we had blood with us that will expire if we wait until the morning. So we go back to the blood drawing room, Allie screams her head off some more, no blood comes out, the guy feels horrible, and in the end we go home with no more blood drawn. He suggested we load her up with liquids tomorrow and then come back on Thursday. Dr. Spiekerman's office agreed.

So we spent the entire day dealing with her medical issues and we still aren't done. I feel so bad for her! I must say that I wasn't prepared to have such little medical background information. When filling out the new patient forms, I had to leave huge sections blank with big question marks over the entire section. The nurse kept asking me questions and all I could say was "I don't know". She finally said, "I don't mean to embarrass you mom, I just have to ask. I understand you probably don't know this stuff." That was just something I wasn't prepared for and it made me sad that I knew so little.

All in all, I'm so happy with her visit with Dr. Spiekerman. I'm not even anxious to get the hip x-rays back. I love her know matter what her physical condition is, and God has been in control this entire time.

After all of that we made a trip to the mall so Adam could buy a new laptop for his business. The boys (all 3) love going to the Apple Store, and they also love to eat at the food court. Okay, and we did promise the boys a tiny toy at the Disney store for going to Phoenix with us and getting Allie's blood drawn. Wes thinks the Disney store is 'Disneyland' so one day he may tell you that he goes to Disneyland a lot.

So we all headed to the mall. The good news is that Alemitu loves her car seat as long as I'm not visible. Same with the stroller. If she can't see me, she is happy in the seat and she sleeps most of the time. Wes asked if he could push the stroller for Allie's first ride in a stroller. He definitely felt like a big kid with a big responsibility. He and Calvin had so much fun pushing her all over the mall. It is so cute to see how they interact with her. Wes has always been my little cuddle bug, so I am making sure that he understands he is still my cuddle bug. He loves watching Allie and asking questions, but he doesn't really want to hold her or touch her yet. Calvin is all about Allie. He loves playing with her, holding her, touching her, etc. The boys are adjusting great and they told me this morning that they love having Allie home. Calvin likes to call her 'Alemitu' rather than "Allie". 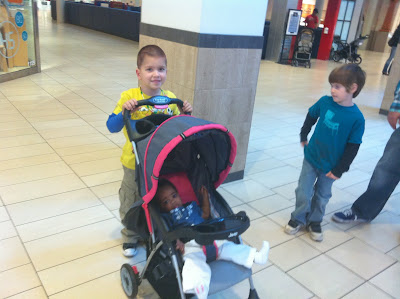 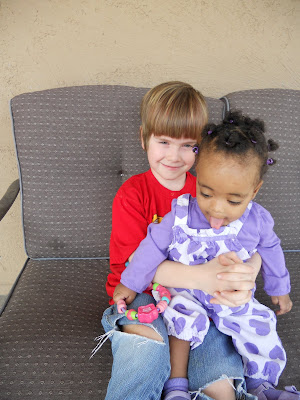 We ended the day with all five of us in our bed playing with Allie. It is so nice to have her home. I realize this is completely random, but because I do this blog mostly for my own memories I must add this next part. The boys just asked if they could have a snack. They both wanted a Rice Krispee treat. Calvin asked for a "Frisbee treat" and Wes asked for a "Christmas Tree". I love that they still mess up their words sometimes!!! Adam and I got a good laugh out of it.
Posted by Sabrina Fischer at 7:27 PM