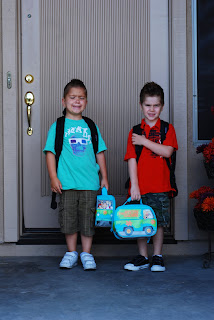 I have been dreading this day for a while. I am just not ready for my boys to be gone all day. I cried hard in January when they started preschool -- just two afternoons a week. I am not ready for a quiet house.

I have done a lot of soul searching recently. With the boys starting school, I feel like I am losing part of my identity. There are always things to do during the day to fill the time. I even switched salons 2 weeks ago so that I could work more hours if I wanted to. I know that in a few days, I will begin my new routine and this will feel normal. It will be a new phase in our lives, and each phase has always been better than the last. I am excited about working more on my business. I am excited about being able to go running in the mornings after I drop them off. I am excited to have a cleaner house, and more time to spend on cooking dinner. However today, in this moment, I am just sad. Today, I am allowing myself to have a pity party. Today, I am eating ice cream for breakfast.

I have been thinking back to a little over 5 years ago. I had been in labor for almost a week and had no clue. I thought it was just back pain (never heard of back labor). Shortly after this was discovered, I was on a helicopter flying to a Phoenix hospital that specializes in preterm labor. I labored for a week, and I begged the doctors to deliver the boys because I was in so much pain. The doctors, rightfully so, kept telling me they needed to stop the labor. It was too late though, and a week later I delivered two premature little guys. For the next 2 years, we spent that time praying that they would grow and be healthy. Especially during the first 6 months, we were praying that they would get big and we could get past the point where they would stop breathing several times a week. By the time they were 2, they were finally caught up with other kids their age. We got excited for them to learn to walk; learn to crawl; be potty trained; sleep in a big boy bed. And today, I want it all to stop. I don't want them to get bigger, older, smarter, etc. I want them to remain 5 years old. It seems silly, but I think I have shed more tears over them starting kindergarten than I did their first 2 scary years of life.

Like I said though, Wes and Calvin were super excited to start. They are going to Dreaming Summit Elementary which is a school in our neighborhood. They are in separate classes, but the classes are right next to each other and they will spend lunch and recess together. The school mandates that twins be in separate classrooms. We didn't want this at first, but the principal explained that normally one twin is more dominant than the other. By having them in separate classes, the non-dominant child will flourish and be able to celebrate his successes better. This made perfect sense, and is so true with Wes and Cal's personalities. The boys were fine with being in separate classrooms with only slight apprehension.

Dreaming Summit is a K-5 school. The good news is that the kindergarten classes are in a separate building. This made us feel so much better as they transition into the "big kid" school. Their teachers, Mrs. VanDeCar and Mrs. Field, are very nice and the boys were so excited to meet their teacher and look at every detail in their classrooms on "meet the teacher" night.

Wes had trouble sleeping last night because he was so excited for school. He told me that he was going to wake me up when it was 7:00. I agreed to this, and we even put a clock in his bedroom so that he could watch for 7. However, inside I was laughing because Wes and Cal sleep until 9:30 on average. We have been slowly getting up earlier the past month, but I have to wake them every day. I knew that Wes could think he would wake me up at 7, but in reality, I would be waking him from a deep sleep.

I was wrong. My alarm went off at 6:40, and at 6:45 I heard Wes and Cal talking in their room. What? At 7 on the dot, Calvin came in and said, "Mom, we see a 7 on the clock. Is it wake time?" I was pretending to be asleep, but I told him that he was right. I asked if Wes was awake (surprised he didn't come in our room with Cal), and he said, "Yeah, but Wes is guarding the clock." Oh, okay. The boys ate their breakfast, got dressed, and we took our first annual school day picture. We drove to the very crowded school, and Adam took Cal into his room and I took Wes. We held back our tears until we got back into the car. The boys were a little nervous, but didn't hesitate to go into their classrooms and sit down. I can't wait to hear about their first day.

For those reading earlier posts, Wes made it clear last night that he wanted to "drive" to the school and not ride his bike. I understand. He then made it clear that when he turns 6 and has to go talk to the teacher before it is time for school, he wants me to drive then too. :-) 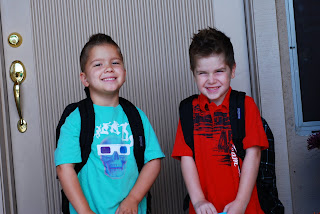 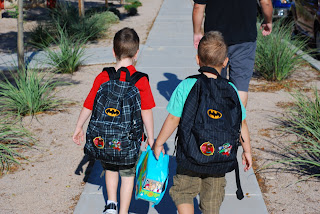 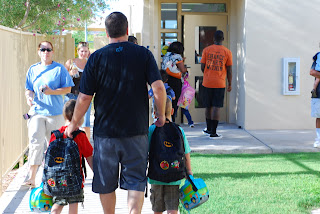 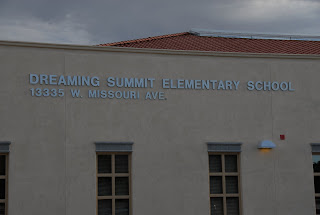 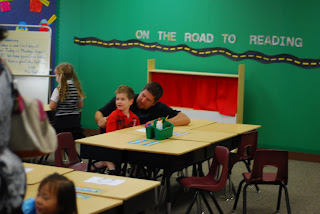 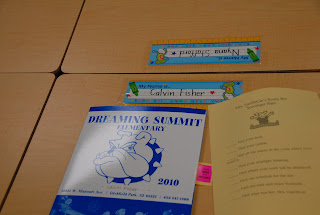 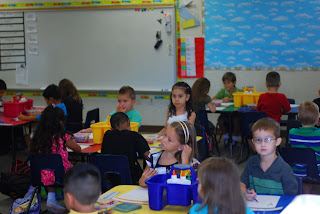 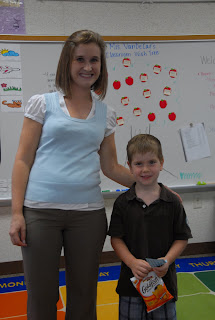 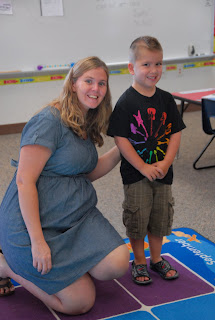 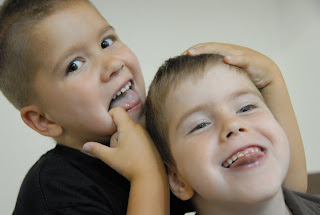 Posted by Sabrina Fischer at 9:12 AM