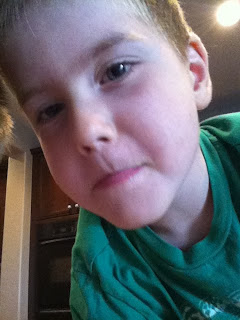 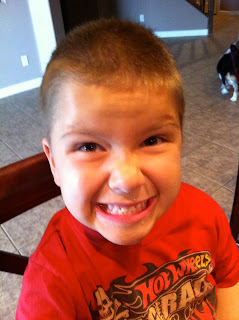 Last week, the boys went to their new school for the first time to have a kindergarten assessment. My dad had just arrived in town for a few days, and I thought it would be fun to ride our bikes to the school (it is in our neighborhood). The weather was "only" 100 degrees which is actually pretty cool for this time of year, and it was pretty overcast which is also rare.

We take off on our bikes, and Wes immediately crashes at the bottom of our driveway. He gets back on his bike, and starts riding again . . . very slowly. About halfway to the school, he crashes again. I realize that his training wheels are a little bent, and it is causing his bike to lean. I fix it as best I can, and we take off again. By now, I'm pretty nervous because Cal has to be at the school within a few minutes while Wes' appointment isn't for another 20 minutes.

Because of the two crashes, Wes is barely moving on his bike. I ask my dad to stay with Wes and slowly ride to the school, and Cal and I take off on our bikes fast so that we aren't late. Instead of that nice, leisurely ride, I keep telling Cal "faster, faster, keep moving". We get to the school with red faces and all sweaty. We ended up being about 2 minutes late. Whew. We made it though. Cal goes back for his assessment.

15 minutes later, Dad and Wes walk in. Wes' face is as beet red, almost purple, that you can imagine. His head is all sweaty. My dad asks for a bandaid because Wes had crashed again right in front of the school -- this time leaving a big gash in his leg. Blood is dripping down his leg. The teacher raids the nurses station, and she brings gauze, band-aids, and alcohol. Wes has never had alcohol on a cut, and so it was quite an awful surprise when my dad was cleaning Wes' leg. You have this poor kid who is all hot and sweaty, and injured, and now crying because of the alcohol. Once Wes gets cleaned up, they take him back for the assessment.

As we are sitting in the waiting room, Cal tells me "Hey mom, I don't think you had a good idea about riding bikes. I think taking the car would have been a good idea." I could only agree.
Posted by Sabrina Fischer at 2:15 PM