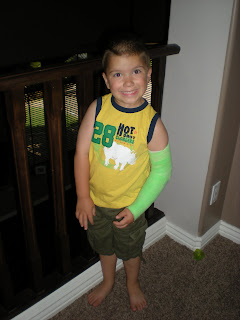 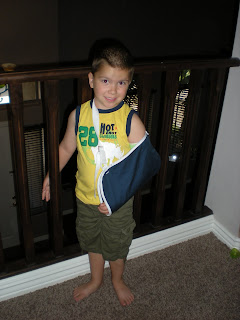 We have had a house full of injuries this weekend! On Thursday, I slipped and fell down the stairs. Other than some bruising, bumps, and jammed toes -- no serious injuries. Whew!

On Saturday, the boys were playing freeze tag with my mom (visiting for the weekend), and Cal got poked in the eye. He wouldn't open his eyes for 5 hours! Finally, he opened them only to show a bright red eye! My mom felt horrible, but we kept reassuring her that they were little boys and it was all part of the package.

That "package" continued onto Sunday. The boys were playing at our neighborhood park, and Wes fell off the curly slide (towards the bottom). He complained of his arm hurting most of the day, and he favored it. It wasn't until he was getting ready for bed that we realized something was wrong. He could bend or straighten it without crying hard. So we went to the doctor at 10 p.m. They don't think there is a fracture, but they are having a radiologist look at the films. The tech thought she saw something, but the doctor said he didn't. So until we hear back from the radiologist, Wes is in a soft cast and a sling. He was pretty excited about having a big, green arm, and even more excited about seeing his skeleton bones on the x-ray. While most of the time, he doesn't act like he is in pain, last night was pretty rough. He kept waking up and crying from the pain.

When Wes wasn't waking up and crying, Cal was. We had let Cal sleep on the floor in our room since Wes was in our bed. Sometime during the night, Cal was bit or stung by something. He started waking up and crying about his foot. He now has a swollen foot that is hot to touch, and we can see a very large bite mark on part of his foot. So, in 20 more minutes, we will head to the doctor again because the triage nurse thinks he has an infection!

Hopefully, we are done with injuries for a while. I am also hoping that Wes' arm isn't fractured because swimming season has begun!
Posted by Sabrina Fischer at 2:28 PM