What does "I love you" mean? 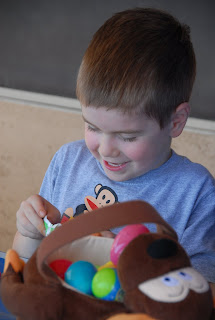 A few weeks ago, the boys were having trouble listening to instruction on the first time it was given. This happens once or twice a year, and when it does, we know we have to become a little more strict with using "time-out" for a few days, and then the problem goes away.

As we were getting ready for bed, and they weren't listening, I said, "Hey boys, you need to listen to mommy the first time. You aren't listening right now, and that makes me sad. If you don't listen the first time, then I'm going to have to put you in time-out and you won't be able to play Mario." That got their attention. In the evenings after dinner, they LOVE playing the Wii. They look forward to it throughout the day. Forbidding Mario is much worse than time-out, and we had never threatened it before.

Adam came into their room a few minutes later to read them a bedtime story. When he was done (and I was out of the room), Calvin asked Adam what it meant for someone to say "I love you". To the boys right now, when they say "I like you" it means so much more to them than "I love you." So Adam said to Calvin, "You know how you say that you like something? Well, I love you means that you really, really, really like it." Calvin then responded and said, "But if you say that you love someone doesn't that mean that you let them do whatever they want?" Adam saw where this was going. He then explained to Calvin that because we love him sometimes we have to set rules for him and tell him not to do something. It doesn't mean that he can do whatever he wants.

I think he understood, but wow, such an inquisitive little guy.
Posted by Sabrina Fischer at 10:04 AM