My boys are growing up! 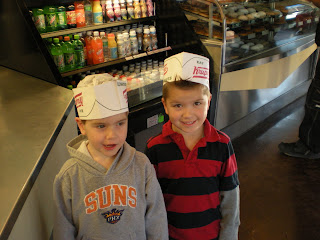 Going to Krispy Kreme to celebrate first day of school 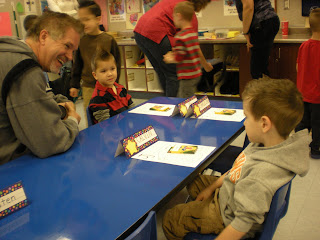 Grandpa helping the boys get settled in on their first day 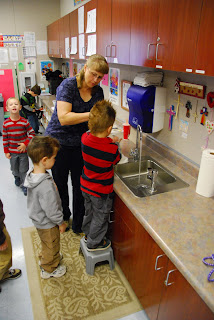 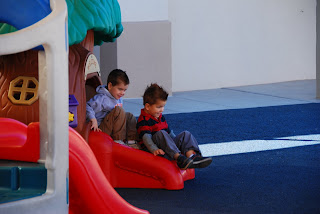 It seems like the boys have grown up so fast during the past month. In early December, they took their first trip away from home with Adam's parents back to Indiana for a long weekend. They seem too little to do that! To make it worse, I was talking to Sherree on the phone, and she was telling me that Wes & Cal are getting along with their cousins, Jayden & Brody, so well. She went on to explain that the "older boys" were running around the house, and then a few seconds later you would hear the little footsteps of the "little one". For a second, I thought "what is she talking about? --- little "one"?? Doesn't she mean "Little oneS", as in two of them?" And then it hit me -- my kids were part of the "older boys". NO!!!

In December, they also started playing with the neighborhood kids. They range from age 6-9, and there are quite a few of them on our street. We love that aspect of our neighborhood because Adam and I were the youngest people in our last neighborhood. Our current neighborhood is also a gated community, so we don't get a ton of cars on our street. Since hanging out with the neighborhood kids, the boys have taken an interest in skateboarding. They can't do it completely yet, so they just ride on their bellies or backs on the skateboard down the driveway. They have also learned to ride their bikes over curbs, front steps, gravel, etc. We have 3 large concrete steps that lead up to our front door. In addition to skateboards and bicycles going over these steps, the boys also take their Power Wheels truck and drive it backwards down the steps. Everyday at 4 p.m. our doorbell rings -- it is one of the kids asking if the boys can come out and play. Surely my kids can't be that old!!

Then, to make matters even worse, they started pre-school today! I feel so comfortable with this preschool, and I'm so glad they are able to go -- but I have been dreading this day. They only go to pre-school two afternoons a week, and so I really shouldn't complain, but I really missed them today. I wasn't sad last night, and I wasn't sad this morning. I took the boys to the school a little early and let them play on the playground, and again, I wasn't sad. However, as soon as I walked into the classroom, I broke down. How embarrassing! :-) The boys were excited, and they had a great time. They are ready to go back on Thursday.
Posted by Sabrina Fischer at 10:24 PM