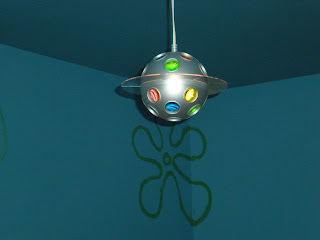 Wes and Calvin like to have "slumber parties" in our room. They sleep on cots in our bedroom, and they normally get to watch a movie before falling asleep. We designate Saturday nights as our slumber party nights. However, the boys came down with colds over the Christmas break. Wes was quick to remind us that when he was sick last time, he had to sleep in our bed. (The boys had high fevers in November.)

Because it was Christmas, and they were a little sick, we let them have slumber parties for quite a few nights in a row over the break. Wes would tell us every night that he was still sick and so he needed to sleep in our room. After a few nights, he announced to everyone that he was going to be sick for a really long time. He thought he was really tricking us.

On January 1st, I took down the Christmas lights that I had hanging in their room. They had enjoyed those lights so much that I wanted to get them a new, special night light rather than just the regular one they normally use. At IKEA, we found a planet light that hangs from the ceiling. When turned on, it projects stars, moons, and planets on their wall in pretty colors. It is very similar to a disco ball.

As soon as I showed the boys the new planet light, Wes yelled out, "I'm not sick anymore!" They couldn't wait to fall asleep in their own room that night.
Posted by Sabrina Fischer at 10:59 PM