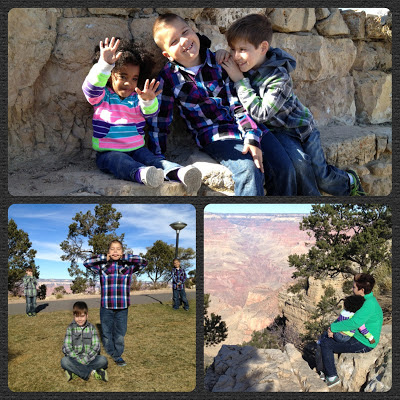 Once again we traveled up north for Thanksgiving this year. We had a great time!

This year we went to Flagstaff again and stayed at Little America Hotel. The kids loved the big areas to play outside, and the weather was perfect. 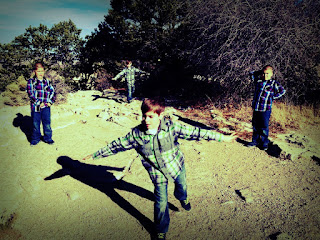 On Thanksgiving day, we took a train up north to see the Grand Canyon. When we booked this excursion, I was so excited to tell the boys. When I told them, they both were like "So what, we've been on a train before .... at the zoo." I had to explain to them that this was a REAL train and it was over 2 hours each way to the Grand Canyon. That got them excited, but they had no clue what the Grand Canyon was. Seriously? So I explained how it is a huge hole. Again, "So what's the big deal about a hole, mom?" Sigh. I gave up. I showed them pictures on the computer and they were so excited after that. They started counting down the days until Thanksgiving. 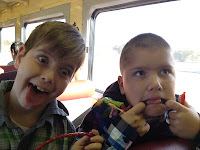 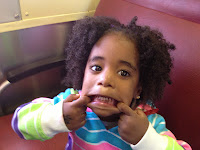 Alemitu was also super excited to ride a train; however, she kept calling it an airplane. It took me a few days to figure out why, but the day leading up to our trip and all during our trip she kept asking for my mom and dad. At dinner, she even removed her hot dog from the bun and used the bun as her telephone to called her grandma. I got out my real phone and let the two of them talk, and she was telling my mom that she was going on an airplane. All during our trip, she kept asking for her grandparents. It occurred to me a few days later that since she believed the train was an airplane, she thought we were vacationing to see grandma and grandpa like we usually do when we board a plane. Poor little girl. Fortunately, she was upbeat about it all and the kids are looking forward to my parents visiting in a few weeks.
Speaking of my parents, my mom was pretty worried about us going to the Grand Canyon with three little kids. Several people fall in each year (normally adults). If you haven't been, the Grand Canyon doesn't have a lot of railing. We were definitely on high alert and taking a lot of precautions that day. At a safe spot that just looked like a dangerous spot (there was flat ground right underneath for viewing), Adam decided to snap a few pictures of the boys to scare my mom. It worked. 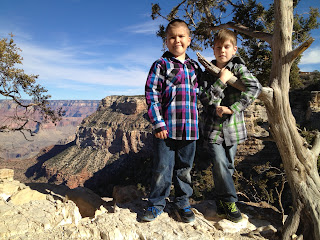 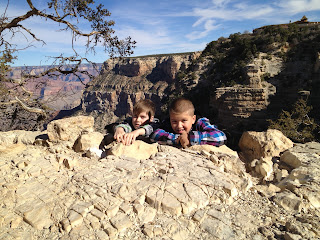 Our train ride was a little over 2 hours each way. We had so much fun, and Alemitu and I got a good nap on the way home (first class seats on our trip home). We stayed at the Grand Canyon for about 3 1/2 hours, and the time went by so fast. Adam even got a really good turkey dinner. 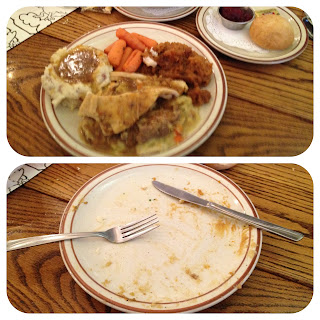 I highly recommend the Grand Canyon Railway trip. We started the day off by seeing a little skit outside with a gun fight and robbery before boarding the train. At the end of the skit, we were able to take our picture with the cowboys. Later, on the way home from the Grand Canyon, those same cowboys robbed our train. All of a sudden the train stops, you see the cowboys riding along on horses and then they board the train and try to rob everyone (for tips). When one of them came on our car, we all pretended to be scared and screamed. Alemitu was actually very scared, and that nice cowboy (who is supposed to be bad) lowered his bandana and sweetly said, "Remember me honey? You took a picture with me and my horse this morning?" I thought that was so sweet. She calmed down, and then he raised his bandana and continued being bad. 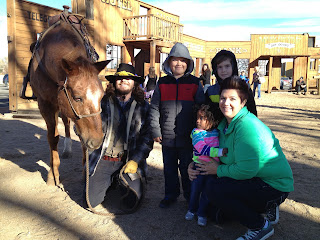 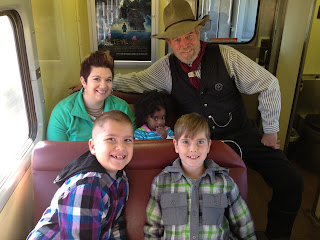 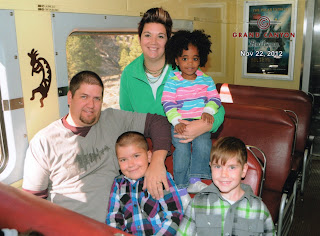 The only bad part of the day was that we didn't get a great family photo at the canyon. Alemitu had been sick and wasn't up to smiling for strangers. Unfortunately, this is what we ended up with: 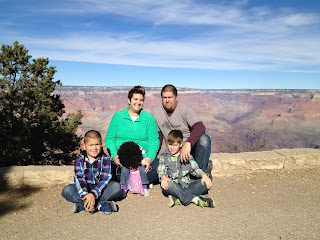 The next day we went to the North Pole Experience. We boarded a bus and went through a magical portal to the north pole. We got to go through Santa's workship, and the kids helped build toys; attend Elf School; eat cookies and snowball soup (hot chocolate); and we even got to spend some one on one time with Santa. Our time was Santa was the best I have ever had. He really took his time to talk to the kids, not so much about their lists than just talk to them about being respectful. When we left, an elf called me back and Santa then told me that I had a really nice family. He also tried to encourage me to get Alemitu in some photo shoots because he couldn't believe how gorgeous she is. (Believe it or not, we hear this all of the time.) The North Pole Experience was a fun evening, even if the boys didn't believe everything they saw. 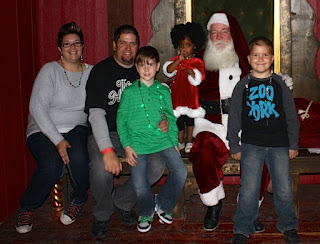 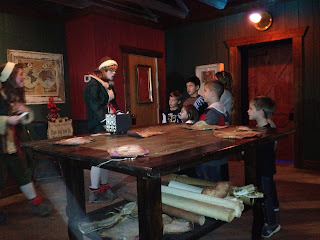 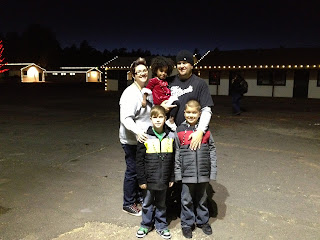 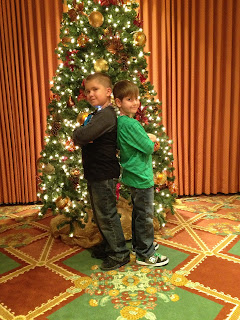 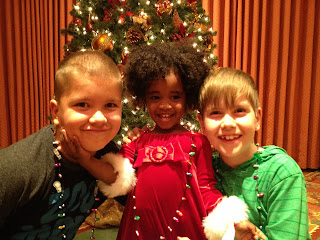 We spent a total of 5 days in Flagstaff. We enjoyed sleeping in, Christmas shopping, going to the movies, and just hanging out as a family. I really missed my sister and her family this year (they normally go with us), but we still had an amazing time. Adam said that he looks forward to our Thanksgiving trip all year long, and I have to agree -- it's the best. 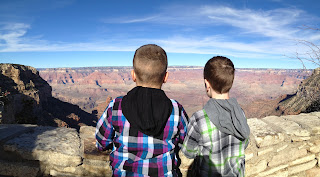 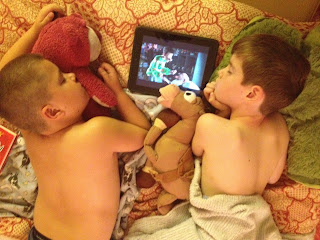 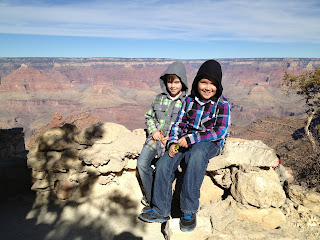 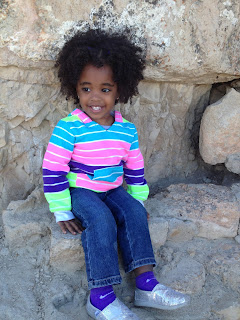 Posted by Sabrina Fischer at 10:56 PM