We've had a very busy and fun Fall! Here are some pictures: 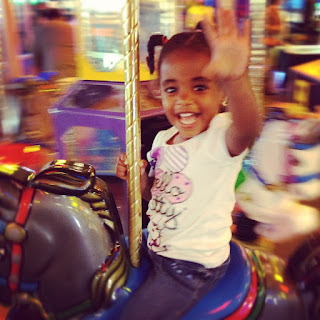 Allie is adjusting to being at home during the day without her brothers. It was rough at first, but we've gotten into our own little groove. She loves singing and dancing, and so we have several dance parties during the day. She also loves to draw and color. We have to be careful not to leave papers lying around, or they will have Allie's artwork on them in no time. She normally draws pictures of Allie, Allie, or Allie.

Adam has traveled quite a few places this fall. I know I am missing a few, but he went to Africa, New Mexico, California, Vegas, and Florida. He is getting ready to go to Mexico in a few weeks. Below are some pictures from his recent shoots.


The boys are just as crazy as ever. They are so busy right now. Between school, jiu jitsu, football, and art class -- they have something 6 days a week! They have recently started playing a lot with the girl across the street from us. She is in their grade at Palm Valley. The weather is so nice that they play outside a lot. Yesterday they were outside from 10:30 - 5:30, playing with their friend the entire time. In October my dad came to visit for a week. I don't have any pictures to share, but they had a blast with him. They had some big wrestling matches, and my dad was a little scared of Wes. He kept saying "He's solid!" Wrestling is probably their favorite thing to do so they really enjoy going to Jiu Jitsu.

And now back to Allie. Oh my goodness, the sass in her attitude is just shocking. I am in so much trouble when she gets older. For instance, yesterday she was mad at me because I threw her disgusting donut piece to the dog. It had been in her mouth for a while, and she took it out and set it on the table. I tried to explain that it was yucky, and she can get another one. That was not good enough. Instead, she started walking quickly away and yelled "I call my dad!" Adam was in the next room, and Allie didn't hesitate to tell on her mean mom.

We've also been working with her on the way she asks for things. Just like we did with the boys, we ask her to say a "full sentence" or ask "nicely". And just like the boys, she responds by saying "full sentence" or "nicely". She is finally understanding what those phrases mean, and this past weekend she started asking for things in full sentences. Of course we praise her when she does this, and her response is "I win! I win!" She is incredibly smart and doesn't miss a beat. 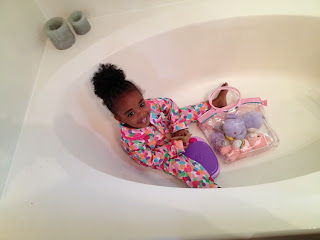 During the fall, Alemitu and I also flew back to Indiana to surprise my parents. My sisters were in on the surprise with me, and my parents were super shocked. My dad left Phoenix the day before I flew out secretly. He was so sad leaving the kids, it was killing me not to say "I'll see you tomorrow Dad!" Anyway, I flew in around 1:00 a.m. and Christina picked me up and I spent the night at her house. The next morning when mom and dad were at the airport to pick up Jenna and her family, we surprised them at the baggage claim. It was a really fun weekend. With me and my sisters living in 3 different states, it is always nice to get our family all together. 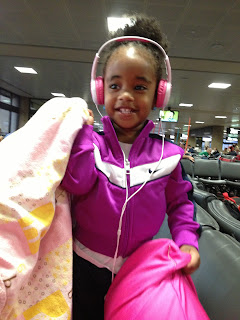 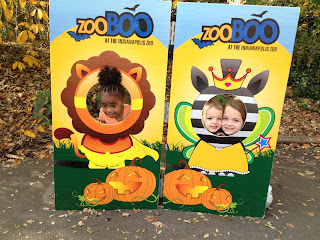 Wes and Calvin's football season just ended. Once again, they were West Valley Champions. They did lose the game for the state title against the East Valley, but they had a good season. Both of them got some flags, and both of them were able to run with the ball a couple of times. We have been with these same kids and coach for about 4 years now. We have all become one big family, and I am going to miss it. The boys are wanting to play basketball this winter and other families are moving on to different sports as well. The nice thing is that we all do things together (outside of sports) just about every week, and so they will still get to see their friends a lot. I have a few pictures below as well as their final, farewell dance. Coach Justin loves to bring the generator and speakers and let the kids dance before the games. Hey, we're the Raiders -- aren't we supposed to be ghetto? 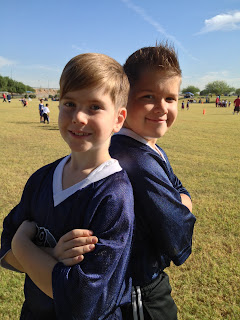 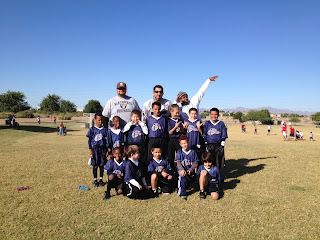 This week we are traveling for Thanksgiving. I can't wait!! This will be our 5th year to go away for the holiday, and it is one of my favorite times each year. Just getting away, relaxing, exploring, and shopping for Christmas makes me super happy. I hope you all have a great Thanksgiving too!
Posted by Sabrina Fischer at 6:22 PM