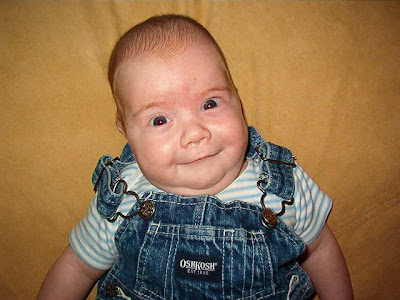 meet our son calVIN. Confused? Okay, this picture was actually taken 4 1/2 years ago and it is one of our favorites. We laugh so hard every time we see it, so I thought this was a perfect opportunity to show it again . . .

A few weeks ago Wes was trying to tell something to his brother. He kept saying "Cal! Cal! Cal!" Calvin ignored him. When I told Calvin to answer Wes, Calvin calmly explained that Wes was calling him "Cal" and he doesn't like that name. He wants to be called "Calvin". We have talked several times over the past few weeks, and he still tells me everytime that he wants people to call him Calvin. It evened bothered him that his grandparents were still calling him "Cal" and so he told us this weekend that he asked them not to do it anymore. He is very serious about the name change, and so we are taking it seriously too. I remember when my parents let me change my name to "Dawn". They didn't question it at all but just respected my wishes, and my family started calling me 'Dawn'. (My name change only lasted a few hours before I was annoyed with it and changed my name back to Sabrina.)