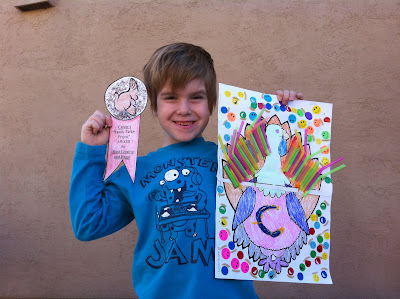 Cal's teacher gave each of her students an assignment - they must decorate the paper turkey she provided with their family. The class was going to vote on who had the best turkey.

A few days after Cal had taken his turkey back to school, I asked him if his turkey won. Real nonchalantly, he said, "Why yeah" (his new phrase of the month "why yes" "why no" "why ok"). I said, "Really? The class thought you had the best one?" Again, without any emotion, "yep".

We had pretty much the exact same conversation a few days after that. I told Adam that it is cute that he thought he won. I assumed that if Calvin had actually won the award, he would have come home so excited and wanted to tell me all about it.

Sure enough, last Tuesday he brought home his turkey and the award for "most happy and creative". I felt horrible that I hadn't believed him. I acted super excited for Calvin, and I said, "I didn't know you won the award!" He said, "I told you that I did already!" Well yeah, he did. But at least he was acting super excited about the award now. Go Calvin!!
Posted by Sabrina Fischer at 3:16 PM