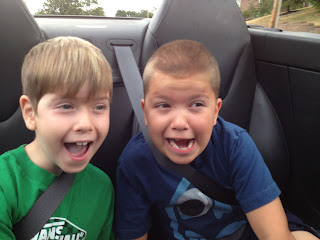 Wes and Calvin are now 7 year olds. I can't believe it. When any of my clients ask how old my boys are, I automatically say "5". They've been 5 for three years now. Not seven. No way.

This year we spent their birthday in Ohio at King's Island Amusement park with my family. It was so much fun. We paid for passes that allowed Adam, my dad, and the boys to go to the front of the line for all of the big roller coasters. They are not scared of any ride. The boys had a blast, and my dad and Adam had headaches. :-) 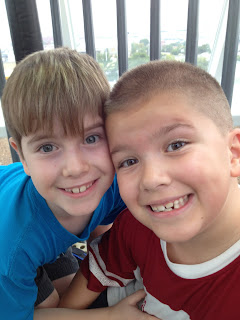 A few days later, we threw a party in Indiana for the boys' birthday (including birthdays for Alemitu, cousin Sydney, and cousin Carter). The boys have started eating cake this year, so they were able to enjoy their birthday cupcakes.

As for Calvin, he is still a super independent guy. He is quiet, and can sit and play with his toys, draw, or build things for hours. He rarely gets frustrated when trying to figure things out. Some other things about Calvin are:

Costumes:  Calvin dresses up in costumes every single day. He will go to restaurants, shopping, etc. with his costume on. Adam and I completely support this and are not embarrassed when people stare (most people think it is cute). Calvin is being creative, and we encourage that. 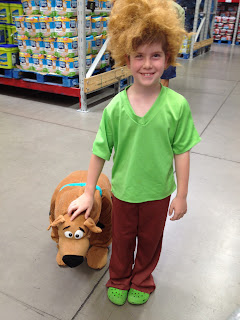 Favorite things to do:  Calvin loves to dress up in costumes; draw; and build things like Legos.

Favorite food: Big roni (shells & cheese). He has recently started eating hamburgers. In Indiana on the way to McDonald's he said, "Mom, I think I want one of those things . . . um . . . I think they are called 'burgers'? They have the two pieces of bread and that thing in the middle. I don't want to eat that thing though." When we went to McDonald's, I ordered him a hamburger and made him take two bites of "that thing" (meat), and he ended up really liking it. 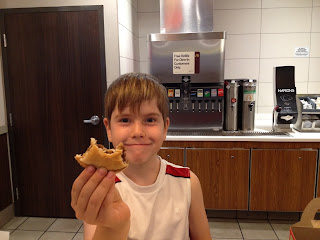 Sports:  Calvin really enjoyed playing basketball over football this past spring. He is also interested in skateboarding, and we will pay to get him private lessons this fall.

Wes has more of an aggressive personality. He is more passionate about certain things, and will tear up if he gets in trouble or can't figure something out. Some other things about Wes are:

Play:  Wes will dress up in costumes if Calvin does. Wes really likes to pretend they are different characters (Mario & Luigi; ghostbusters; etc.) even if they are in regular clothes. He always wants to be playing pretend. He likes to tell Calvin what Calvin is supposed to say, but he is getting better about letting Calvin think of things on his own. 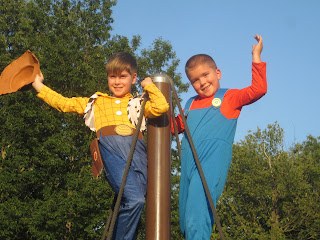 Favorite things to do:  Play with batman guys, ghostbuster guys, and Teenage Mutant Ninja Turtles. He loves to play the Wii -- especially when I play with him. We defeat the Mario games together.

Sports:  Wes enjoys football and basketball. He enjoys the team sports, has slightly more of a competitive attitude, and can sometimes get frustrated trying to learn the individual sports. He loves to challenge us to races. At times, I can't beat him.

Personality:  Passionate. Loud. Lover. Protector. While he can sometimes talk mean to his brother, he is his brother's biggest protector. At 1 1/2 years old, Kindercare told us that Wes is always protecting Calvin and won't let the other kids near him. Wes' coach in football and basketball is amazed at how much Wes looks out for Calvin, even when they are scrimmaging against each other. At school last year, there was a time when Wes ended a friendship with someone because that person was blaming Calvin for an incident that happened. Wes has the exact same attitude towards Alemitu. He understands her better than anyone. He takes care of her, and can't stand to see her sad. 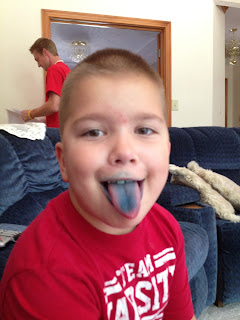 Anxiety:  Wes has my anxiety. He gets nervous every day that we will wake up late for school (never happened). Tonight, I was having trouble getting his clock to work and he was really worried about not knowing the time throughout the night. Wes always wants to know the time. I brought in my clock for him, and then he was worried about me sleeping too late. Ever single day, Wes gets anxious about what we are having for dinner, and when we are having it. He always likes to know the plan and make sure we are sticking to it. He even asks me questions about how he will find a girl to marry one day. (He also told me that he is never moving out of the house.) The sad part of his anxiety is that he thinks about death a lot. He often talks about how he will be so sad when I die. He wants me to stay the same age so we can die together. He has asked if I will wait for him in heaven. It brings tears to my eyes every single time we have these conversations. I even cried about it to his doctor when I went without Wes. It is completely normal for kids like Wes to have these thoughts. It is more of his personality than it is anxiety. I was told to just keep answering his questions, and he'll move on.

I am so blessed to have such sweet, loving boys. They are so well-behaved, and when they do get in trouble they just sit in time-out quietly without talking back. My boys are so sweet to their little sister. They include her when they play. They get excited for her when she does something new. I'm one lucky mom. 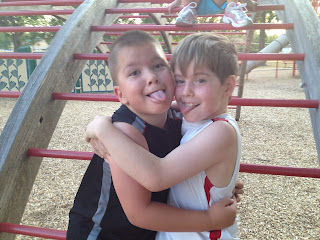 Posted by Sabrina Fischer at 11:06 PM