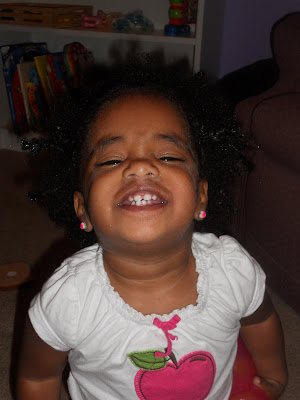 Two months ago, I took Alemitu to the doctor for a check-up. Her doctor has been working closely with her development and "gut issues" (as he calls it). He has even called me a couple of times. He has been giving her top notch care.

At our last appointment, he did mention that he thinks she has more delayed growth than we originally thought. He showed me her growth chart on his computer, and it showed that Alemitu had shot up in height over the 3 months prior. It looked good to me. Evidently, that was a trigger for the doctor that she had had some serious malnutrition in the womb and as an infant, and she had delayed growth. When he looked in her mouth and saw that at 17 months she only had 4 teeth, he said he wanted to see me back in 2 months and we were going to take measurements again and talk about a plan.

Normally the parent worries about the health of their children, but I wasn't worried at all. I thought it was a "no big deal" kind of thing, and her doctor didn't seem freaked out either. I was wrong. Evidently, he was dreading seeing me today for several hours before we came in. He was bummed Adam wasn't able to make it, and he was expecting to give us some real bad news. I knew none of this. I wasn't worried at all.

After the nurse took measurements, the doctor came in and asked questions about her growth and speech than about her "gut issues". I was a little confused, but I told him that she talks all of the time, and that she must have hit a growth spurt because she can open doors now and some of her clothes are too short all of a sudden. He gave me the weirdest look and said, "Really? Growth spurt?" Um yeah, I think so.

To make a long story short, after taking her new measurements it was discovered that her measurements from the previous time were incorrect. The nurse wrote down an incorrect height measurement (showing she was a little taller than she is right now), and so last time there was a huge spike in the growth chart. Again, that meant nothing to me, but her doctor was overly excited that it was an error. He kept telling me how worried he was and how he was really preparing himself to give me bad news. He went on and on and on about her. I would chuckle a little when he would tell me how excited he was (about every other sentence), and he stopped one time and said, "Seriously mom. I was really dreading this appointment." I don't know what the bad news would have been, but it doesn't even matter. Alemitu does have delayed growth, but nothing to be concerned about. It is at a level that is completely normal with "healthy" adopted children from 3rd world countries.

Her doctor confirmed that her biological parents are really tiny because she is still really tiny. He also confirmed that once again, he thinks that she was taken care of in the womb and at birth. This was his initial statement back in March, but it all changed two months ago. He said that she is just going to be a petite girl. We expected this because her features are so petite. She is on the growth chart (just barely), but he was happy that she is now touching the lowest curve on the growth chart and she is staying with the curve rather than jumping high or low.

All in all, it was a great appointment. I went in thinking Alemitu was healthy but small with some delayed growth, and I came out with the same conclusion. No more special appointments for her, and she doesn't have to go back for another 6 months!! Below are some fun pictures from today: 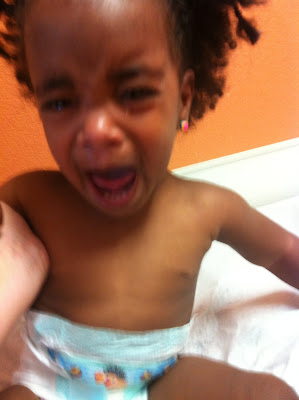 Allie started screaming as soon as we walked into the exam room. 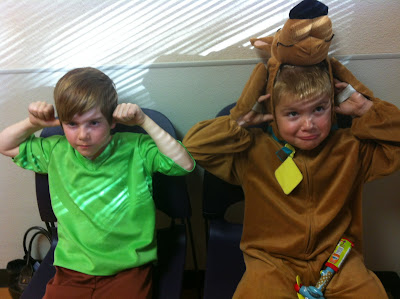 The boys couldn't handle the noise. (What helped Alemi to stop screaming
was to pet Wes' head and say "niiiiiiigh doddy" - nice doggy.) 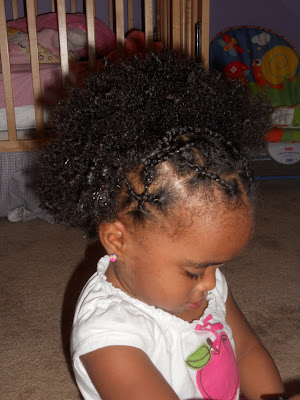 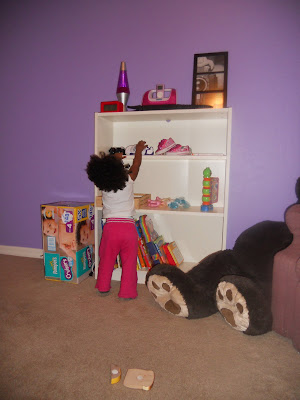 Alemitu is all about shoes. If she isn't wearing shoes, she will bring a pair to us
and keep saying "Shoe, shoe, shoe, shoe" over and over until you put it on.
She keeps working (lots of grunting) at trying to get them on herself, but
she isn't even close yet. We keep her shoes on this shelf, and if she sees any lying
on the ground she will immediately put them back where they belong. Shopping with her sippy cup, ponies, and Wii remote.
Posted by Sabrina Fischer at 4:10 PM