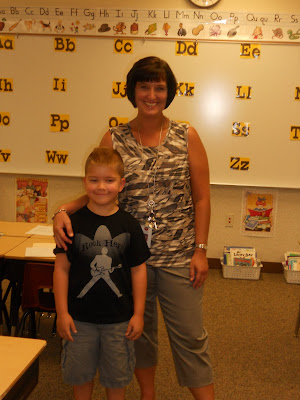 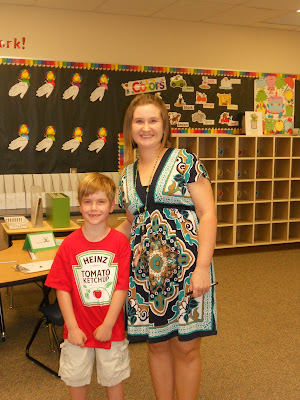 Today my boys started school as First Graders. I am so proud of them, and they are so proud to be first graders. All summer we hear things like "It won't be wild when we go to Jenna's house anymore with the dogs because we are first graders." (By the way -- they are still wild when at Aunt Jenna's house.) They also keep talking about how they will get to play on the big kid playground rather than the little kindergarten playground "which was actually really boring" according to Wes.

Last year at this time, I was a complete mess as my two boys were going to school. I was pretty sad this year, and I shed some tears, but it was so much easier than last year. Last year I knew I would miss them terribly, I would be lonely at home, they had never gone to full-day preschool, and I was worried about Calvin adjusting since we were on the fence about sending him to kindergarten. This year, I don't have those worries at all. I am sad they are growing up, but I know that they will do great. They both did awesome last year, and they loved going to school every day. Calvin has the same teacher, and that makes things so much easier. Wes has a new teacher but he told me today that he likes her and he gave her a high five.

The boys purchased new shirts and lunchboxes for the school year. My mom had sent them a little money for school supplies. I sewed a new Ghostbusters patch on their backpacks. 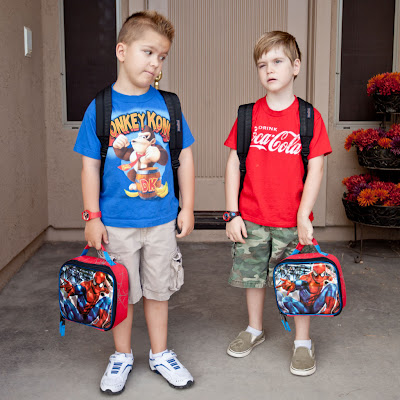 This picture makes us laugh because it shows so much of their personality. The posed, smiling pictures weren't that great because Calvin's eye has been a little swollen the past few days and the sun was really hurting it. So we thought we'd go with posting this picture this year.

They were excited to start school, and they settled into the classroom really easily. We peeked through the window a few times and they were doing great. Calvin has a lot of the same friends as last year because his class is mostly the same, but Wes told me that he met two new friends today. Also, tonight he asked if he could make new "Mii" characters on the Wii. After about the 3rd one, he asked if he could make a girl and if I could tell him how to spell "Molly". Hmmm I didn't ask any questions so he wouldn't be embarrassed, but now we have a Molly Mii character on the Wii.

The boys have lunch and recess together and they are excited about that. They still call each other "best bud" so it is great that they can see each other throughout the day. Calvin's favorite part of the day was recess, and Wes talked a lot about going to the computer lab and having his very own computer where he could type things.

It looks like this is starting off to be a great year! 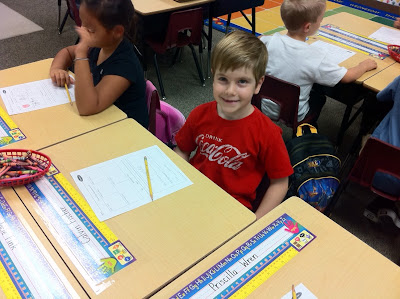 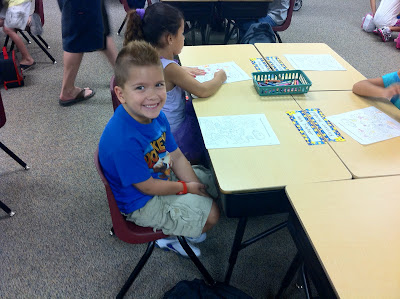 And last but not least, a random picture of Calvin dipping his donut in ketchup the other night. Gross! He actually liked it. 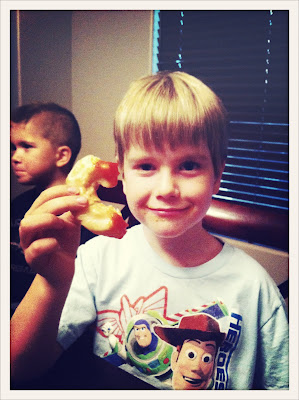 Posted by Sabrina Fischer at 10:30 PM