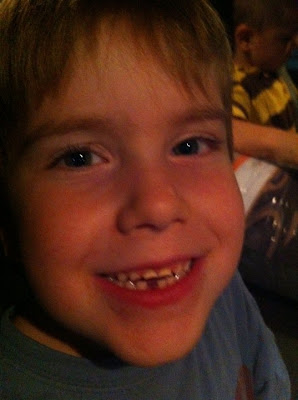 Both boys have had some slightly wiggly teeth for a little while now. After school today, Cal tells Wes that his tooth is really wiggly. Cal kept playing with his tooth all afternoon. When we were at Home Depot, he kept wiggling the tooth, and I told him to try and wiggle it as far as he could. He pulled it down and said a quick "ouch". Normally, Cal steers far away from anything painful, but today he was pretty determined to get that tooth out.

I then told Cal to see how far he could push his tooth. Again he tried, ending with a quick "ouch" -- but no tears or fear. As we were checking out, Calvin told the cashier (yelling and jumping) "My tooth is wiggly!"

Walking out to the car, I told him to just keep pulling, pushing, and twisting and the tooth would come out. He asked "Twisting? I didn't know you had to twist it!" I knew I was pushing a little, but Cal was so determined he kept trying. When we got in the car, he told me that he couldn't twist it but he wanted me to try. I told him I would stop if it hurt. I twisted the tooth once, and he says "ouch!" I quickly pulled away to see his tooth hanging by a thread. I told him that it needed to come out because it was just hanging by a thread, and he told me to twist it again. One more twist and the tooth was out! He wasn't scared at all!

I don't know if we have ever seen him so excited about anything. He called the grandparents and Aunt Jenna. He kept starting the conversation out by saying, "I have something really 'excited' to tell you." He is on cloud 9, and I am so proud of him for being really tough. He told Aunt Jenna that he didn't even cry and that he is a really strong boy because he can open doors that are heavy.

Congratulations Calvin!! One down and like 20 more to go.
Posted by Sabrina Fischer at 8:55 PM