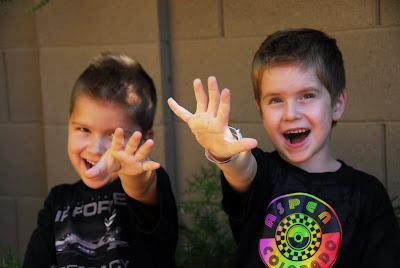 My mom tells a story about when Jenna was younger and had to have a bunch of tests done for unknown hives. She was getting a CT scan (I believe), and this time, mom swore that Jenna would not have to get a shot. Mom was wrong. They had to inject dye into Jenna. Jenna screamed and screamed and screamed. She told mom that she had money (10 cents) and she was going to call dad from a pay phone. My mom stood outside the room and cried because she felt so bad for Jenna and the broken promise.

Well, this year it was my turn. The boys had their 5th year well-check. When the nurse told us no shots were needed, we celebrated as we waited for the doctor. However, at the end of the appointment, the doctor asked to check Cal's hemoglobin level since Cal doesn't eat meat. Poor kid. Not only did he have to get a shot when I told him that he wouldn't, but he had to do it by himself without his brother getting one too. He was very brave and didn't scream or move away, but he cried a little and kept saying "But mommy, you said I didn't have to get a shot . . . " Next time, we'll celebrate AFTER the doctor's appointment. :-)

We love their doctor for so many reasons, but it is so important for us that when he comes in the room he never has to ask who is who. He treats the boys as complete individuals. This time, he told me that he has never had a set of twins where one looks just like his dad and the other looks just like his mom. We too find the similarities shocking when looking at old pictures of us.

Here's to another healthy year!
Posted by Sabrina Fischer at 3:07 PM