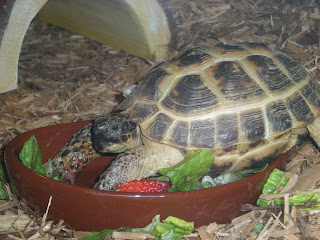 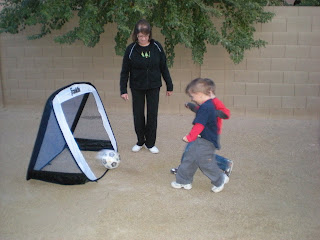 Playing with their new soccer goal from Gma & Gpa. 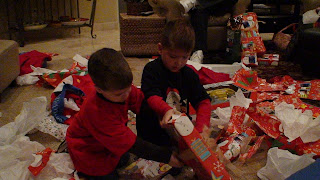 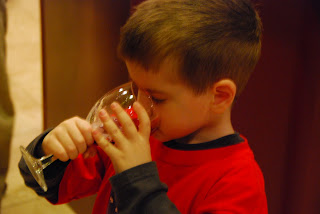 Cal enjoying his first taste of Sparkling Red Grape Juice in a wine glass, of course! 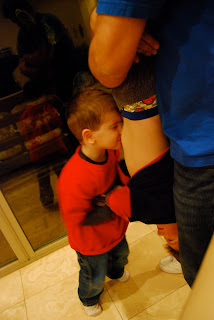 Calvin giving his brother a raspberry on the belly.

We had a great Christmas this year!! Wes and Cal are the perfect age to realize that they can make a "list" for Santa. It is also the age when they put every single toy they can think of, see at stores, or see on TV -- on that Santa list.

On Christmas Eve, we continued our tradition by taking the boys to a movie. This year it was The Princess and the Frog. In the late afternoon, we went over to Adam's parents house to have Christmas Eve dinner with them and Adam's Grandma Fischer. It is always nice to spend time with her. She has alzheimers, and looking on the positive side, it is nice to see someone open Christmas presents out of turn because they can't wait, and also to see her get pleasantly surprised again when she notices gifts she has already opened but forgot about them. Even better, she can laugh along with us!

Zach and Jenna always spend the night on Christmas Eve. After the boys go to bed, we normally get presents ready while we snack on tons of food and watch Christmas Vacation. They were great sports when the boys woke us all up at 7:45 (normally it is around 9 am) because they were so excited to see what Santa brought. This year, Santa brought the boys a pet turtle and skateboards. They were excited! Calvin named the turtle "Mario", and Wes wanted to name the turtle "Tuck". We settled on "Mario Tuck". Later in the afternoon, Calvin told Zach that "Mario Tuck" is the turtle's full name, but they are just going to call him "Tuck".

This year was also different because Sabrina's parents came into town on Christmas Day. We were able to take a good afternoon nap before they came, and then we had Christmas dinner and opened presents with them. My parents got the boys bigger bicycles which came at a perfect time. The boys have started to play with the neighborhood kids and after riding their toddler bikes off of the curbs and down the front step -- they just don't work anymore.

Sabrina's parents stayed for a week, and it was a great week of playing games, hiking, going to the zoo, etc. We had a great time. On New Year's Eve, we ended up just staying home and getting some rest. We all slept in until after 10:30 a.m. the next morning. (Gotta love kids that like to sleep in!)
Posted by Sabrina Fischer at 9:47 PM